June 2019 was the Hottest June on Record 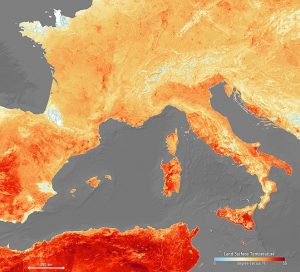 June 2019 is officially the warmest June on record since record-keeping began in 1880, according to new data released by NASA. And on top of this dubious distinction, the first half of 2019 was the second hottest such period on record, second only to 2016, with each of the last five January-through-June periods being the warmest in the 139-year record.

“As we have shown in recent work, the record warm streaks we’ve seen in recent years simply cannot be explained without accounting for the profound impact we are having on the planet through the burning of fossil fuels and the resulting increase in atmospheric greenhouse gas concentrations,” according to Michael Mann, the director of the Earth System Science Center at Penn State University.

Carbon dioxide concentrations reached 415.5 parts per million in May this year, more than 48 percent over pre-industrial levels, and the highest the planet has seen in at least 800 millennia—a period where CO2 levels, typically averaging in the low-200s, never exceeded 300 ppm—and possibly the highest in over 3 million years. The sudden acceleration in the rise CO2 levels over the past century is also unprecedented, and rivaled only by the Chicxulub meteor impact 65 million years ago.

“The latest numbers are just another reminder that the impacts of human-caused warming are no longer subtle,” Mann continues. “We’re seeing them play out in terms of both unprecedented extreme weather events and the sorts of planetary-scale temperature extremes betrayed by these latest numbers.” Recent examples of such extreme weather events include record-breaking heat waves, wildfires, flooding and an increasingly unstable polar vortex.

Subscribers, to watch the subscriber version of the video, first log in then click on Dreamland Subscriber-Only Video Podcast link.
2019-07-17
Previous Headline News Post: Increasingly Unstable Antarctic Glaciers may be Reaching their Point of No Return
Next Headline News Post: 50 Years Later, Apollo 11’s Achievements–and its Mysteries–Continue to Endure