The US’s Largest Wildfire is Currently in Alaska, Fueled by Record-Breaking Temperatures 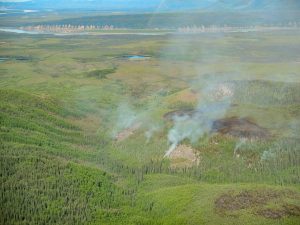 As a consequence of a long stretch of record-breaking high temperatures, the state of Alaska is currently the site of the largest wildfires in the United States, with the Hess Creek Fire consuming 145,321 acres of woodland as of July 9. The size and rapid spread of the fire has hampered attempts to contain the blaze, as fire crews work toward slowing the conflagration’s advance toward mining camps near the area.

Sparked by a lightning strike on June 21, the Hess Fire isn’t the only one raging in Alaska, with firefighting crews being dispatched from the lower 48 states to battle over one hundred separate blazes. Alaska is already on its highest alert level, Preparedness Level 5, having seen more fire activity than usual over the last month, driven by hot, dry weather. The average acreage burned per year over the last ten years in Alaska is 1.3 million acres, with the total burned so far in 2019 at 937,000 acres; before 2010, a typical year would only see between 300,000 and 500,000 acres burned.

The state’s second largest wildfire is currently the 96,000-acre Swan Lake Fire, 50 miles south of Anchorage on the Kenai Peninsula, although this fire is reportedly slowing. Record temperatures have continued to plague Alaska, with 90°F (32.2°C) being recorded on July 4 at Ted Stevens Anchorage International Airport, beating the 85°F (29.4°C) record set there in 1969; the airport’s average high temperature for July 4 is 75°F (23.9°C). The cities of Kenai and King Salmon also broke records with temperatures of 89°F (31.7°C) each.

In an interview with the Associated Press, Rick Thoman, a climate specialist at the University of Alaska Fairbanks’ Alaska Center for Climate Assessment and Policy, said that this stretch of high temperatures is due to climate change.

“It’s a weather story and it is an ongoing changing environment story as well as these kinds of extreme weather events become much more likely in a warming world,” according to Thoman.

As the world warms, the polar regions warm disproportionately faster than the rest of the planet, due to a poorly-understood phenomenon called the polar amplification effect. The Canadian government recently released a report revealing that the country, of which a great deal of its land area resides in the Arctic, has warmed by more than double the current global average, an average of 3.1°F (1.7°C), since 1948.

The temperature of the waters surrounding Alaska are also abnormally high, with ice extent levels now lower than they were in June 2012, a year that saw record lows for Arctic sea ice, although June 2019’s sea ice extent is still marginally better than the 2016 record-holder for the month of June.

Sea ice extent toward the end of June “remained well below average on the Pacific side of the Arctic, with open water extending from the Bering Strait, and along the coasts of the Chukchi and Beaufort Seas all the way to Melville Island in the Canadian Arctic Archipelago,” according to NOAA’s Arctic Sea Ice News & Analysis. Water temperatures in the Chukchi Sea were recorded at 9°F (5°C) above their expected average.

“Surface temperatures are above normal everywhere around Alaska,” Thoman adds. “The entire Gulf of Alaska, in the Bering Sea, in the Chukchi Sea south of the ice edge, exceptionally warm waters, warmest on record, and of course record-low sea ice extent for this time of year off the north and northwest coasts of the state.”

Subscribers, to watch the subscriber version of the video, first log in then click on Dreamland Subscriber-Only Video Podcast link.
2019-07-10
Previous Headline News Post: Astronomers Have Traced a Mysterious Radio Signal Back to its Extragalactic Source
Next Headline News Post: Tropical Storm Barry Makes Landfall as a Category 1 Hurricane