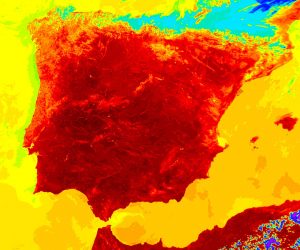 Western Europe is in the middle of a record-breaking heat wave, with countries such as France, Germany, Poland, Portugal, the Czech Republic, Spain, and Switzerland suffering through sweltering heat, brought on by an abnormal high-pressure system that has parked itself over the region. Soaring temperatures have prompted heat alerts from authorities, amidst fears that a repeat of the 2003 heat wave that killed over 70,000 people across the continent. Additionally, a month-long heat wave continues to scorch India, with 36 people dead so far, and no immediate relief in sight.

France’s national weather agency, Météo France, has issued their highest weather warning, calling for citizens to exercise “absolute vigilance” in regards to the potentially deadly heat, with conditions now worse than the 2003 heat wave that killed 15,000 in France alone. Three deaths have been attributed to the heat wave thus far.

Germany set a new national record with Coschen, near the German-Polish border, hitting 38.6°C (101.5°F), with temperatures forecast to reach even higher over the weekend; the Czech Republic broke another national record with the northern town of Doksany reaching 38.5°C (101.3°F); Switzerland broke their record high for the month of June on the 26th, with the Zurich Affoltern station leading 43 other weather stations that marked the record with a high of 35.5°C (95.9°F).

Additionally, the Polish town of Radzyn reached 38.2°C (100.8°F), and Berlin hit a whopping 38.6°C (101.5°F). Temperatures across Europe are forecast to rise even further over the weekend, prompting one meteorologist in Spain to warn his audience that “Hell is coming.”

Although not directly connected to the situation in Europe, India continues to suffer a prolonged, month-long heat wave that has killed 36 people so far this summer. Temperatures reached 50°C (122°F) in the western city of Churu on June 1; India’s capital of New Delhi topped out at 48°C (118°F) on June 10, a June record for the city.

With heat waves are becoming “more intense and frequent,” according to the Indian Institute of Tropical Meteorology’s Raghavan Krishnan, India’s National Disaster Management Authority (NDMA) launched a series of initiatives in 2016 to mitigate the number of deaths caused by heat waves, implementing measures such as opening shelters for homeless people, adjusting work hours to help government employees accommodate peak temperature times, and improved water distribution. These initiatives appear to be helping, with heat-related deaths down from 2,400 fatalities in a 2015 heat wave, to 250 dead from a similar wave in 2017.

Meanwhile, scientists continue to press the fact that extreme weather events such as the current heat waves will continue to increase in both frequency and intensity if climate change is allowed to continue unchecked.

“This increase in heat extremes is just as predicted by climate science as a consequence of global warming caused by the increasing greenhouse gases from burning coal, oil, and gas,” warns Stefan Rahmstorf, a climatologist at the Potsdam Institute for Climate Impact Research.