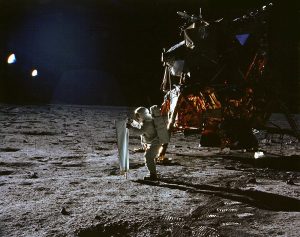 “Here men from the planet Earth first set foot upon the Moon, July 1969, A.D. We came in peace for all mankind”
~Engraving on Lunar plaque, affixed to Apollo 11 Lunar Module

Fifty years ago, Apollo 11, the culmination of a massive advancement in technology and engineering, landed American astronauts Neil Alden Armstrong and Edwin Eugene “Buzz” Aldrin Jr. on the surface of the Moon. Traveling with command module Pilot Michael Collins from their starting point at the Kennedy Space Center’s Launch Complex 39A on Merritt Island, Florida, to Mare Tranquillitatis on the Moon and back again, their mission was an eight-day, 480,000-mile round-trip that fulfilled a challenge put forth a mere eight years earlier by then-President John F. Kennedy “of landing a man on the Moon and returning him safely to the Earth.”

The success of Apollo 11 effectively brought the Space Race, a fierce rivalry between the United States and the Soviet Union that had driven their respective space programs since the 1957 launch of the world’s first satellite, Sputnik 1, to a close. This achievement also established 20th century humanity as an interplanetary culture, having finally set a footprint in the soil of another world, a dream so old that we could only speculate as to its antiquity.

But one enduring mystery concerns what happened during Armstrong and Aldren’s two-and-a-quarter hour walk on the Moon’s surface: during the EVA (extra-vehicular activity), Armstrong switched his radio to a private channel set aside for medical purposes—a channel not broadcast to the public for privacy purpose—for two minutes.

In the mid seventies stories began to circulate that the two-minute radio blackout was due to the appearance of two UFOs that appeared near the Lunar Module. Supposedly photographed by Aldrin during the encounter, the unidentified lights left moments later, allowing the astronauts to resume their work.

The first mention of this incident was what unidentified ham radio enthusiasts, listening in on the transmissions from Tranquility Base on their home radio sets, allegedly heard during the two-minute blackout, published by non-fiction and sci-fi author Otto Binder:

Apollo11: These babies are huge, sir… enormous… oh, God, you wouldn’t believe it! I’m telling you there are other spacecraft out there… lined up on the far side of the crater edge… they’re on the Moon watching us…

In 1975, retired NASA communications engineer Maurice Chatelain published Our Cosmic Ancestors, in which he wrote:

“[O]nly moments before Armstrong stepped down the ladder to set foot on the Moon, two UFOs hovered overhead. Edwin Aldrin took several pictures of them. Some of these photographs have been published in the June 1975 issue of Modern People magazine.”

Later, in 1979, Chatelain said that “The encounter was common knowledge in NASA, but nobody has talked about it until now.” He went on to claim that “…all Apollo and Gemini flights were followed, both at a distance and sometimes also quite closely, by space vehicles of extraterrestrial origin – flying saucers, or UFOs, if you want to call them by that name. Every time it occurred, the astronauts informed Mission Control, who then ordered absolute silence.”

The incident was reportedly even backed up by Soviet scientists. In his 1988 book Above Top Secret, Timothy Good writes that Dr. Vladimir Azhazha, a physicist and Professor of Mathematics at Moscow University, said “Neil Armstrong relayed the message to Mission Control that two large, mysterious objects were watching them afte3r having landed near the moon module. But his message was never head by the public – because NASA censored it.”

Good also wrote that an anonymous professor he met at a NASA symposium said that Armstrong had confided in him that the encounter was meant to warn NASA against establishing a base on the Moon. According to the professor’s account, Armstrong explained that he couldn’t provide any details, “except to say that their ships were far superior to ours both in size and technology – Boy, where they big! … and menacing… No, there is no question of a space station.” As for the remaining planned Apollo missions, Armstrong said that NASA was already committed to carrying them out, with crews returning to the Moon six more times, ending with Apollo 17 in 1972.

Armstrong passed away in 2012, taking whatever had transpired during his two-minute private transmission with him—when later asked about it, he declined to divulge what was discussed during the blackout. Aldren maintains that his crew saw nothing out of the ordinary during their flight (at least in terms of extraterrestrial spacecraft) and that reports that a UFO had paced Columbia on its way to the Moon were based on his account, taken out of context, regarding the sighting of discarded components of the mission’s S-IVB stage-three rocket, that launched the Command and Lunar Modules from Earth orbit toward the Moon. Regardless, the question of whether or not the crew of the Eagle witnessed a formation of UFOs intruding on their mission remains a mystery to this day.

Subscribers, to watch the subscriber version of the video, first log in then click on Dreamland Subscriber-Only Video Podcast link.
2019-07-19
Previous Headline News Post: June 2019 was the Hottest June on Record
Next Headline News Post: Storming Area 51 is a Bad Idea, According to Bob Lazar