An Internet Apocalypse Could be Triggered by a Solar Superstorm 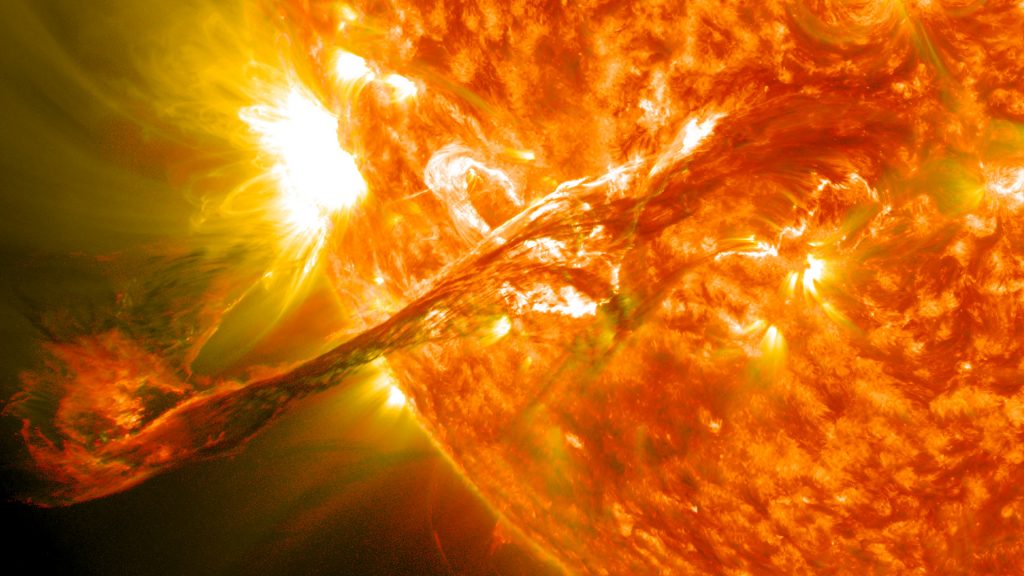 While the danger posed by major solar storms to our civilization’s power grids is well documented (such as Whitley’s must-read 2012 ebook on the subject, Solar Flares), the potential effects of such storms on another network vital to the functioning of our society—the internet—is not as well understood. A new study looks at the potential effects of a major solar storm on the information superhighway—and why North America might be the hardest hit in a disaster such as this.

The Sun is coming out of its latest solar minimum and is expected to reach its next maximum around 2024—a maximum that might be one of the strongest on record—prompting concerns that another massive solar storm like the 1859 Carrington Event might cause significant and long-lasting damage to the world’s power grids, an issue that governments have been addressing in recent years. But a new paper, presented at the annual ACM Special Interest Group on Data Communication (SIGCOMM) conference by University of California, Irvine computer science professor Sangeetha Abdu Jyothi, analyzes the potential vulnerability of our internet infrastructure to what Jyothi refers to as “solar superstorms”.

Most of the physical infrastructure of the internet is made up of fiber-optic cables, a transmission medium that, in-of-itself, is immune to the effects of geomagnetic storms. However, while the electronic infrastructure running the network under our city streets is less vulnerable, due to being grounded and shorter in distance, “long-haul cables have repeaters to boost the optical signals spaced at intervals of 50-150 km [31 to 93 miles] which are powered using a conductor,” according to the paper, titled Solar Superstorms: Planning for an Internet Apocalypse. “These repeaters are vulnerable to GIC-induced failures, which can lead to the cable being unusable.”

Depending on the strength of an incoming CME, the undersea cables that connect the continents would be the weakest link in the case of a solar superstorm, with long stretches of cable left exposed on the seabed. And the infrastructure in North America relies on longer stretches of cable than, making it more vulnerable to the surge of high-energy particles than its European and Asian counterparts, networks that use shorter lengths of cable.

The situation is even more precarious for satellite-based networks, such as SpaceX’s Starlink service, as “GPS and communication satellites which are directly exposed to solar storms will suffer from lost connectivity during the event, potential damage to electronic components, and in the worst case, orbital decay and re-entry to Earth (particularly in low Earth orbit satellites,” according to the study text.

“The networking community has largely overlooked this risk during the design of the network topology and geo-distributed systems such as DNS and data centers,” the paper warns. Large-scale Internet outages spanning the entire planet could last for several months before the infrastructure is repaired; e-commerce and manufacturing would grind to a halt, costing the US economy an estimated $7.2 billion per day as orders.

Jyothi said that it was the global unpreparedness for the current COVID-19 pandemic that brought the idea of how poorly we might deal with the specter of a geomagnetic-based planet-wide shutdown of the internet. “What really got me thinking about this is that with the pandemic we saw how unprepared the world was,” she said in an interview with Wired magazine. “… there was no protocol to deal with it effectively and it’s the same with Internet resilience. Our infrastructure is not prepared for a large-scale solar event. We have very limited understanding of what the extent of the damage would be.”