Verified:  US Navy Footage of UFOs Gets Seal of Authenticity from the Pentagon 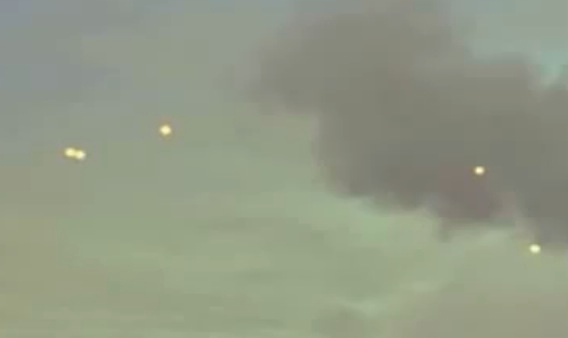 New details regarding a series of UFO sightings involving the crews of US Navy destroyers operating off the coast of San Diego in July 2019 have emerged, including a video clip of a “pyramid”-shaped craft hovering over the USS Russell, along with recordings made during other encounters. However, the objects encountered during the four-night encounters remain unidentified, according to the Chief of United States Naval Operations.

Documentary filmmaker Jeremy Corbell received word of a classified briefing regarding military encounters with UAPs that was held on May 1, 2020, by the Office of Naval Intelligence (ONI). The aim of the briefing “was to de-stigmatize the UAP problem and to promote more intelligence collection regarding UAP incursions and encounters with active military deployments,” according to Corbell, and was built upon an earlier briefing held on October 18, 2019.

“Recent UAP interactions have been put in our path with purpose, and should be looked upon as advantageous opportunities for future research. With every incursion, overflight and potential midair—it has never been more prudent to investigate this UAP phenomenon and deglamorize the UFO stigma through the ranks,” according to a Senior Intelligence Officer that was familiar with the briefings that was in contact with Corbell.

The most recent briefing, designed to educate the recipients on the subject of UFOs, focused on three sets of encounters: the July 2019 incident involving the USS Russell and three other naval destroyers; an encounter with a spherical object involving the USS Omaha; and an encounter with no less than three separate craft made by the crew of a F/A-18 off of the coast of Virginia on March 4, 2019. The briefing included an estimated 10 videos, including forward-looking infrared (FLIR) and heads up display (HUD) recordings, and 10-12 photographs of the UAPs encountered during these three cases.

The footage from the USS Russell, taken with night vision equipment, shows three lights in a triangular formation “hovering approximately 700 ft over RLS’s [USS Russell’s] fantail,” according to a Carrier Strike Group 9 (CCSG-9) comment that accompanied a still photo from the video. Each of the lights appear to be triangular in shape as well; they were described by one witness as being pyramid-shaped, according to Corbell. The CCSG-9 comment alludes to them being separate objects, describing them as “UNK UAS, seemingly triangular in shape from the angle of observation,” where “UNK UAS” stands for “unknown unmanned aircraft system” (unidentified drones).

The second case involved the USS Omaha’s encounter with a spherical object that appeared to enter the water near the ship before completely disappearing. The USS Omaha’s crew conducted a search to recover any potential wreckage, but their efforts were “ineffective”, according to the CCSG-9 comment accompanying the images. A submarine was also involved in the search, but also found no trace of the mysterious object.

The third case details an encounter with at least three distinctly different objects by the crew of a F/A-18 Hornet fighter jet operating out of Naval Air Station Oceana in Virginia that included cellphone images taken by the weapon systems officer (WSO). Although the encounter took place on March 4, 2019, it was in the same W-72 warning area where a series of UFO encounters took place in 2014-2015, including a near-miss incident with another F/A-18.

The three objects are described as “acorn”, “metal blimp w/payload” and “sphere”, according to the objects’ respective shapes. Although there has been speculation that these objects may simply have been balloons, they managed to hover motionless for hours, despite the wind present at the altitude where they were encountered. Regardless, an investigation into the encounter has failed to produce an explanation.

This series of images and video have been verified as being real by the Pentagon, although they have declined to comment on what the objects depicted might be. “I can confirm that the referenced photos and videos were taken by Navy personnel,” according to Pentagon spokesperson Susan Gough. Gough went on to say that “the UAPTF [Unidentified Aerial Phenomena Task Force] has included these incidents in their ongoing examinations.”

The Chief of United States Naval Operations has also verified that the objects encountered by The USS Russell and her sister ships in July 2019 remain unidentified.

“No, we have not,” said Admiral Michael Gilday, the U.S. Navy’s top officer, when asked if they had identified the objects. “I am aware of those sightings and as it’s been reported there have been other sightings by aviators in the air and by other ships not only of the United States, but other nations—and of course other elements within the U.S. joint force.” It is also notable that Gilday mentions that the Pentagon is aware that other nations are also having similar encounters.

“Those findings have been collected and they still are being analyzed,” Gilday added. “I don’t have anything new to report… on what those findings have revealed thus far. But I will tell you we do have a well-established process in place across the joint force to collect that data and to get it to a separate repository for analysis.”

Subscribers, to watch the subscriber version of the video, first log in then click on Dreamland Subscriber-Only Video Podcast link.
2021-04-17
Previous Headline News Post: The Missing Page to a Classified Report on the Monroe Institute Was At the Monroe Institute All Along
Next Headline News Post: Russia Resumes Testing Its Nuclear Doomsday Torpedo