‘I Almost Hit One of Those Things’: More US Navy Pilots Come Forward with their UFO Encounters 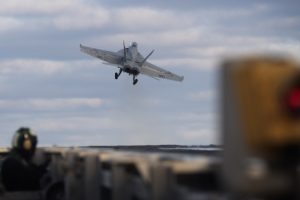 Naval pilots assigned to the USS Roosevelt have reported having encounters with unknown objects, on a near-daily basis, from the summer of 2014 through March 2015, while participating in training maneuvers along the east coast of the United States between Virginia and Florida. Speaking in interviews with The New York Times, five Navy pilots described encounters with objects that exhibited flight characteristics that are far beyond what conventional aircraft are capable of, and yet “had no visible engine or infrared exhaust plumes, but they could reach 30,000 feet and hypersonic speeds [more than five times the speed of sound],” according to the NYT. One of the pilots’ encounters also almost resulted in a mid-air collision when one of the objects made a dangerously close pass between two aircraft, prompting the pilots involved to file an official aviation flight safety report.
The testimony of the pilots, members of the VFA-11 “Red Rippers” squadron operating out of Naval Air Station Oceana, Virginia, follows earlier reports from witnesses to a series of encounters involving the Nimitz Carrier Strike Group in 2004 off of the coast of California. The 2014/2015 USS Roosevelt encounters appear to be the source of the “Go Fast” UFO footage, released by the To The Stars Academy of Arts & Science in 2017.

The unidentified objects first started appearing on the pilots’ scopes after their radar systems had been updated from older units that had been installed in the 1980s. Initially, they assumed that the blips were just false tracks caused by errors in the new systems, but the strange tracks persisted, appearing at altitudes ranging from 30,000 feet all the way down to sea level; they could also alternately hover, then accelerate to speeds more than five times the speed of sound—more than 3,836 mph (6,174 kph), and make sudden stops and instantaneous turns at these speeds—maneuvers that not only would have turned the body of a human pilot to a mushy pulp, but also have shredded a conventional aircraft.

Lieutenant Danny Accoin, a F/A-18 Super Hornet pilot, had two encounters with these objects. His first was with an object that appeared on radar; intending to intercept the bogie, Accoin directed his fighter to fly 1,000 feet directly below the object, but once he was in position, the object wasn’t visible through his helmet camera, even though his radar system was still actively tracking it.

Accoin’s second encounter occurred a few days later, when both the tracking systems on a training missile that his aircraft was carrying, and his infrared camera, locked onto one of the objects, indicating that the appearance of the object wasn’t a glitch in one of the systems, but something physically present outside the aircraft. “I knew I had it, I knew it was not a false hit,” according to Accoin. But the object still remained invisible to the naked eye, “I could not pick it up visually.”

The pilots began to suspect that these objects were part of a classified advanced drone program, but that speculation was quickly dropped when one of them not only spotted one visually, but had one pass dangerously close to his aircraft.

Sometime in late 2014, Lieutenant Ryan Graves, an F/A-18 Super Hornet pilot who has been with the Navy for 10 years, encountered a squadron mate that had just returned from a mission “with a look of shock on his face.” Graves was stunned to hear what the other aviator told him next.

“I almost hit one of those things.”

The pilot had been flying in formation with his wingman, with their aircraft roughly 100 feet apart, when one of the unknown objects flew directly between the two planes, right past his cockpit. In addition to giving him a nasty scare, the close encounter also allowed the pilot to get a good look at the intruder, appearing to be a cube that was encased in a sphere.

This startling encounter immediately changed the situation to a safety issue, with the near miss prompting the filing of an official aviation flight safety report.

“It turned from a potentially classified drone program to a safety issue,” according to Lieutenant Graves. “It was going to be a matter of time before someone had a midair,” an accidental collision to be avoided.

The pilots refused to speculate on what these objects were, given the exotic nature of their flight capabilities. Although some of these flight characteristics, such as their hypersonic speed, ability to hover and fly at 30,000 feet, are attainable by conventional aircraft, we have no known vehicle that can perform all of these feats, let alone make high-speed turns and near-instantaneous stops.

“We have helicopters that can hover,” Lieutenant Graves explains. “We have aircraft that can fly at 30,000 feet and right at the surface.” But “combine all that in one vehicle of some type with no jet engine, no exhaust plume.”

Such extreme speeds and maneuvers are also very energy-intensive, and would require a conventional aircraft to burn through its fuel reserves in short order. “These things would be out there all day,” said Lieutenant Graves. “Keeping an aircraft in the air requires a significant amount of energy. With the speeds we observed, 12 hours in the air is 11 hours longer than we’d expect.”

The encounters ended after the squadron left with the USS Roosevelt for Iraq and Syria, deployed to perform bombing missions against Islamic State forces.

Subscribers, to watch the subscriber version of the video, first log in then click on Dreamland Subscriber-Only Video Podcast link.
2019-05-29
Previous Headline News Post: DoD UFO Videos Confirmed to be Genuine, Don’t Expect the Navy to Release More in the Future
Next Headline News Post: More Water Found on Mars and the Unraveling of Jupiter’s Great Red Spot: News from Around the Solar System