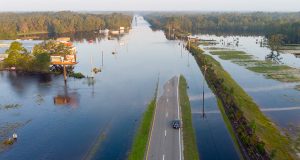 July 2019 was the hottest month on record for the planet, a period that saw numerous heat waves smash regional records around the globe, including one in the Arctic that triggered massive ice loss in Greenland. Although July only narrowly beat the previous record holder, July 2016, by a narrow margin, this new record is especially significant due to the absence of a significant El Niño event, a factor that inflated temperatures for the previous record holder, July 2016.

According to the European Union’s Copernicus Climate Change Service (C3S), July came close to hitting a whopping 1.2°C (2.16°F) above pre-industrial levels (0.56°C (1.0°F) above the 1981-2010 global average), meaning last month either met or narrowly beat 2016’s record, and is also a follow up to the hottest June on record. 2016, however, experienced back-to-back record-breaking El Niños; while 2019 is also considered to be an El Niño year, temperatures across the equatorial Pacific barely qualify as El Niño conditions—if we had had a repeat of the 2015-2016 El Niño, this July’s monthly record would have been much higher.

Those temperatures were borne out in massive heat waves seen around the globe, in turn sparking massive wildfires around the Arctic, and the high pressure weather system that baked Europe in July was also responsible for a heat wave in Greenland that triggered massive ice melt over the course of the month, according to the National Snow and Ice Data Center (NSIDC).

197 billion metric tonnes (217 billion tons—that’s a fifth of a trillion tons!) of ice is estimated to have melted off of the surface of nearly 60 percent of Greenland’s ice sheet over the course of July, an event not seen since July 2012; although the extent of the melt was less than what was recorded in 2012, when 97 percent of Greenland’s ice sheet experienced surface melt, temperatures this time around are much higher, at 8-11°C (15-20°F) above normal.
This included a record-breaking one day loss of over 10 billion tonnes (11 billion tons) on July 31 that shaved a full millimeter of ice off of the affected sheets.

The amount of water flowing into the ocean on July 31 alone, roughly the equivalent to 4 million Olympic-sized swimming pools, is estimated to have raised ocean levels by over a quarter millimeter (0.28mm); the totality of July’s surface melt is expected to have hiked ocean levels by a full half millimeter, or 0.02 inches.

“July has rewritten climate history, with dozens of new temperature records at the local, national and global level,” according to Petteri Taalas, secretary-general of the World Meteorological Organization.

“This is not science fiction. It is the reality of climate change. It is happening now, and it will worsen in the future without urgent climate action,” Taalas continued. “Time is running out to rein in dangerous temperature increases with multiple impacts on our planet.”