“Unprecedented” Wildfires are Burning Across the Arctic 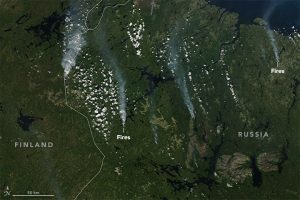 Over the past six weeks more than 100 intense and long-lived wildfires have been recorded burning north of the Arctic Circle, an “unprecedented” event since record-keeping began on such events. The fires have been most severe in Alaska and Siberia, and since the start of June have been responsible for the release of over 100 million tons of carbon dioxide into the atmosphere, an amount almost equivalent to Belgium’s total emissions in 2017.

“It is unusual to see fires of this scale and duration at such high latitudes in June,” explains Mark Parrington, Senior Scientist and wildfires expert at the Copernicus Atmosphere Monitoring Service (CAMS). “But temperatures in the Arctic have been increasing at a much faster rate than the global average, and warmer conditions encourage fires to grow and persist once they have been ignited.”

The fires, called “unprecedented” by Parrington, are the result of prolonged stretches of hot, dry weather experienced in Alaska, Canada and Siberia: temperatures hit 32.2°C (90.0°F) in Anchorage, Alaska on July 4, and the northernmost permanently inhabited place in the world, Alert, in Canada’s Nunavut Territory, reached 21.0°C (69.8°F) on July 14, well above the 7.0°C (44.6°F) July average for the settlement, situated only 817 kilometers (508 miles) from the North Pole.

Although wildfires in the Arctic aren’t uncommon they typically occur in July and August, not June, but even in later months they aren’t as extreme as the fires this season has produced.

“The number and intensity of wildfires in the Arctic Circle is unusual and unprecedented,” Parrington said in an interview with CNN. “They are concerning as they are occurring in a very remote part of the world, and in an environment that many people would consider to be pristine.”

Aside from the more direct threat from the effects of burning, massive fires such as these release harmful pollutants into the atmosphere, “including particulate matter and toxic gases such as carbon monoxide, nitrogen oxides, and non-methane organic compounds,” according to a CAMS press release. Indeed, these pollutants can drift far enough to affect air quality in populated areas halfway around the globe.

And in addition to releasing a mass of greenhouse gases equivalent to the emissions of a nation of over 11 million people, massive wildfires of this nature can also deposit large amounts of soot on remote glaciers, exacerbating the effect of global warming.

“When particles of smoke land on snow and ice, [they] cause the ice to absorb sunlight that it would otherwise reflect, and thereby accelerate the warming in the Arctic,” according to Dr. Claudia Volosciuk, a scientist with the World Meteorological Organization (WMO).