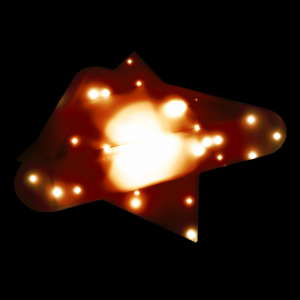 A new witness to the infamous Rendlesham Forest incident has come forward, former USAF Security Police Master Sergeant and retired police officer, Michael Stacy Smith. Smith was a 19-year old recruit when he witnessed the events that occurred over two nights in late December 1980 in the woods near AFB Bentwaters, events that, according to Smith, traumatized the young MP, and may have caused serious illness later in life, and left him haunted by visions regarding antimatter and antigravity propulsion systems.

His first encounter took place roughly a month before the better-known Rendlesham Forest incident itself, on a night when the base was on alert in late November 1980, while Smith was assigned to a post at a bunker behind the east gate leading to RAF Woodbridge. At one point, Smith went outside the bunker to relieve himself, when he spotted an orange light moving in his direction through the nearby forest.

“An orange, reddish, glowing ball bigger than a beach ball, but it had, like, a cat’s eye in the middle of it.”

“When it got right in front of me it stopped, and it just stayed there, and it stayed there.” Despite being armed with an M60 machine gun, Smith called for a security response team, and the object was still present when the two-man SRT arrived, hovering a few feet off the ground.

One member of the team jumped a nearby fence in an attempt to flank the glowing intruder, but the object took off, and according to Smith, “it left so fast, to the left, it went to the left, through the trees, it was gone.” Smith was so rattled by the incident that after the security team left he “climbed up in the back of an aircraft hangar, behind me, I stayed there all night.”

“I don’t remember from then ’til when I got to the barracks, I cannot remember.” Smith reports that after entering the hangar, his next memory was standing in the shower in the barracks before going to bed.

“My memory was gone. I mean, something that traumatic, [as] a kid, you should remember it, it should it should just be burned in your damned brain!” Smith exclaims. “But to me it wasn’t, it was like I was in a daze.”

His next encounter took place during the Rendlesham Forest incident in late December. Smith was again assigned to the east gate leading to RAF Woodbridge air base, when a new recruit who was also assigned to the post started making a commotion: “a triangular-shaped craft” was coming from the direction of Bentwaters, over the east end of the runway.

“It was bluish in the middle… and had white around the edges of it,” Smith continues in his description of the object, “it made no noise, and it was just above the treeline, and it went into Rendlesham Forest.” Smith contends that this sighting corresponds to the tape recordings of the incident made by then-deputy base commander Lieutenant Colonel Charles I. Halt.

On a later evening, Smith was assigned to logging radio communications at a relay station between Bentwaters and Woodbridge, when two air rescue aircraft landed. These all-white aircraft lacked identifying tail numbers, and base personnel were ordered not to approach the aircraft. Smith believes that these aircraft were the ones that transported the officials that interrogated base personnel in regards to the UFO encounters that occurred earlier.

While working as a police officer in 1998, Smith was diagnosed with a form of thyroid cancer that his doctors said was unusual, something usually only seen in individuals “exposed to a high dose of radiation over an extended period of time,” according to Smith, “and it usually takes fifteen to twenty years to show up,” a window that fits the eighteen years since Smith’s encounters at Bentwaters. Other conditions began to emerge in subsequent years, including an enlarged heart, an aneurism in his main aorta, malignant hypertension, and acute migraines. He has also been diagnosed with a genetic condition that causes his body to produce too much iron, a condition that his family has never reported symptoms of.

Smith also says that he’s haunted  by “visions” of what he calls “antimatter” and “antigravity”, concepts that he says he “never heard of”. Part of these visions is a mathematical formula that combines these two concepts to form a propulsion system, a formula that he refuses to divulge due to a previous bad experience that resulted with sharing it with someone. Smith also isn’t the first to come forward with claims of having mysteriously acquired knowledge in the wake of the Rendlesham Forest incident: in 2011 Jim Penniston, also assigned to Bentwaters in 1980, reported having received a stream of information in binary code after touching the triangular object he encountered in the woods.

June 18, 2021
Dreamland Podcast
Dreamland This Week: A Intelligence Officer from the USS Roosevelt Speaks Out about the ‘Gimbal’ UFO Incident
June 15, 2021
New Observations
Ed Conroy and The Report on Communion: The Facts Behind the Most Controversial True Story of Our Time (Part 2)
June 11, 2021
Dreamland Podcast
The Trinity Crash: Jacques Vallee and Paola Harris Uncover an Unknown UFO Crash from 1945
June 9, 2021
The Unseen Podcast
Yvonne Smith Explores Hypnosis and Healing
June 4, 2021
Dreamland Podcast
Beyond 60 Minutes: Grant Cameron on the True Depth of Contact