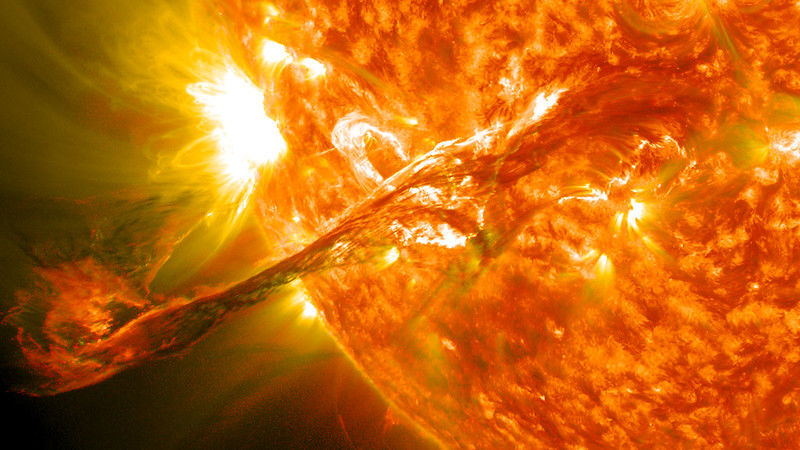 Researchers have discovered what may have been a powerful solar storm that occurred nearly 9,200 years ago that may have been two orders of magnitude stronger than anything recorded in the modern era. Aside from the apparent sheer strength of the storm, the event has researchers concerned because it also appears to have occurred in middle of a solar minimum, the period during the Sun’s 11-year cycle when our home star is supposed to be calm.

The evidence for such an event was discovered in ice cores extracted from the Antarctic and Greenland ice sheets, appearing as increased counts of beryllium and chlorine radionuclides embedded in the layers that were deposited in the ice in 7,176 BCE. When galactic cosmic rays (GCR), high-energy protons and other atomic nuclei originating from space, strike the Earth’s atmosphere they create new radionuclides, unstable atoms with an altered number of protons or neutrons in their nuclei; in this case, large quantities of beryllium-10 and chlorine-36 were found, with counts of both particles recording as being 2.5 times higher than normal.

These radionuclide patterns are similar to other events that occurred in 774-775 CE, 993-994 CE and 660 BCE. The 774-775 CE event is the largest of the three, with a fluorine-30 count ten times higher than the largest event recorded directly by modern instruments; this modern event, called GLE (Ground Level Enhancement) no.5, stemmed from a solar energetic particle (SEP) event that occurred in February 1956, but only spurred a fraction of the production of beryllium-10 that resulted from the 774-775 CE event. The strength of the 7,176 BCE event outlined in the study is estimated to be at least on par with the 774-775 CE event, if not stronger.

Although anomalous aurorae were recorded in China and England at the time of the 774-775 CE event, solar events such as this had virtually no discernable impact on the ancient world. Today, however, the resulting geomagnetic storm could prove catastrophic to the electrical grids that run modern civilization, and if the storm that generated these radionuclides is as strong as the data suggests, it “further pushes the magnitude of a potential worst-case scenario for SEP events,” according to the study text. Additionally, the storm appears to have occurred during a solar minimum, when the magnetic activity that would ordinarily launch a stream of particles into space (and potentially towards Earth) is typically quiet, a troubling development for our otherwise stable Sun.

The study calls for more research into ancient solar storms, to better understand the Sun’s cycles and patterns to determine if it has the potential to hold surprise outbursts that we should be ready for.

“Additional events need to be discovered and studied… in order to robustly assess whether there is a consistent pattern in the occurrence of extreme SEP events in relation to the 11-year solar cycle and solar activity levels in general, and the probability of occurrence of such extreme events,” the study authors state.

Whitley outlines the danger presented by powerful solar storms, and what needs to be done to prepare for them, in his 2012 ebook Solar Flares: What You Need to Know.

Subscribers, to watch the subscriber version of the video, first log in then click on Dreamland Subscriber-Only Video Podcast link.
2022-01-31
Previous Headline News Post: 2021’s Extreme Heat Continues to Fuel Deadly Weather Patterns
Next Headline News Post: A Billion Years of Earth’s Geological History Is Missing, but Researchers May Have Found Out Where It Went