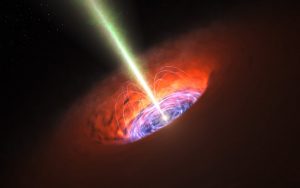 “The Event Horizon Telescope has captured yet another remarkable image, this time of the giant black hole at the center of our own home galaxy,” said NASA Administrator Bill Nelson. “Looking more comprehensively at this black hole will help us learn more about its cosmic effects on its environment, and exemplifies the international collaboration that will carry us into the future and reveal discoveries we could never have imagined.”

Although Sagittarius A* (or Sgr A* for short, and remember to pronounce the asterisk as “star”) is far closer to Earth than the one at the heart of Messier 87—a mere 27,000 light years vs. 53 million light years, or 2,000 time the distance—it was easier to produce an image of the M87 SMBH, named Pōwehi (Hawai’ian for “the adorned fathomless dark creation”) because our view of Sgr A* is obscured by the material that makes up the Milky Way, while our view of the M87 SMBH is from along the large galaxy’s poles, leaving little gas and dust to hide the massive object. Additionally, the M87 SMBH is also 1,500 times more massive than Sgr A*, meaning that even at that distance the size of the event horizons of each black hole appear to be the same size through telescopes using the same magnification.

That difference in mass also means things happen on different time scales for each SMBH: while individual events might takes weeks to unfold around Pōwehi, a time scale that allowed the EHT’s astronomers to compile a more comprehensive image of the object, similar events around Sgr A* might only be observable for mere hours, providing fewer opportunities to put together a complete image.

These events take the form of X-ray flares, theorized to be produced by powerful magnetic fields in a process similar to what happens on the surface of the Sun, albeit on a scale millions of times more powerful. These flares occur roughly once a day, and although they are brief compared to their M87 counterparts, over time they allowed the EHT team to assemble a picture of Sagittarius A* that bears a striking resemblance to the 2019 portrait of Pōwehi.

Indeed, the images illustrate that the cosmic processes unfolding in the immediate neighborhoods around both black holes are remarkably similar, despite being in different galaxies and occurring at vastly different scales. The images will also allow researchers to refine their knowledge of how these massive structures operate, and in turn how they affect the matter surrounding them.

“None of our models matches the data perfectly, but now we have more specific information to work from,” explains Kazuhiro Hada, with the National Astronomical Observatory of Japan. “The more data we have the more accurate our models, and ultimately our understanding of black hole accretion, will become.”

“If the new EHT image shows us the eye of a black hole hurricane, then these multiwavelength observations reveal winds and rain the equivalent of hundreds or even thousands of miles beyond,” according to McGill University’s Daryl Haggard, one of the lead scientists of the multiwavelength project. “How does this cosmic storm interact with and even disrupt its galactic environment?”

Subscribers, to watch the subscriber version of the video, first log in then click on Dreamland Subscriber-Only Video Podcast link.
2022-05-16
Previous Headline News Post: US Congress To Hold a Public Hearing on UAP
Next Headline News Post: All of the Building Blocks of Life Have Been Discovered in Meteorites