Astronomers Have Released the First Direct Image of a Black Hole 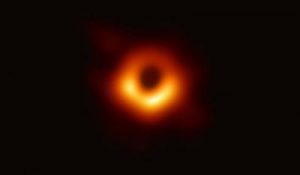 An international team of astronomers have released the first direct image of a black hole, a long-distance snapshot of high-energy particles as they irreversibly plummet toward the black hole’s event horizon, the point where nothing—not even light—can escape.

“We have taken the first picture of a black hole,” announces Event Horizon Telescope (EHT) project director Sheperd S. Doeleman, of the Harvard–Smithsonian Center for Astrophysics. “This is an extraordinary scientific feat accomplished by a team of more than 200 researchers.”

The Event Horizon Telescope is a project currently comprised of eight radio telescopes located in diverse locations around the world, that combined effectively create a virtual telescope the size of the Earth. Data gathered simultaneously by the eight individual observatories, from locations as diverse as Hawaii’s James Clerk Maxwell Telescope on Mauna Kea to the South Pole Telescope in Antarctica, is sent to a singular location to be combined using a process called “very-long-baseline interferometry (VLBI)”, producing an image that is thousands of times sharper than what a single observatory could produce on its own—clear enough to read the text of a newspaper in New York from a location as far away as Paris.

Located 53 million light years away in the constellation of Virgo is the supergiant elliptical galaxy Messier 87 (or M87), a spherical body of stars roughly twice the mass of our own Milky Way galaxy. Nestled in the center of this massive stellar community is a similarly-outsized supermassive black hole named Powehi, meaning “adorned fathomless dark creation” in Hawaiian. At over 6 billion times the mass of the Sun—that’s more than 1,500 times more massive than the Milky Way’s own supermassive black hole, Sagittarius A*—Powehi is one of the most massive black holes known in our local group of galaxies. The powerful magnetic fields generated around it propel particles, drawn from a fast-moving accretion disk that orbits the object, to just under the speed of light in a jet of gases over 4,900 light years long; producing over ten trillion times the energy produced by the entire Milky Way galaxy in one second, this relativistic jet is also one of the brightest radio sources in the night sky.

The enormous mass of this supermassive black hole also gives it an absurdly large radius: at 130 astronomical units (1 AU equals the distance between the Earth and the Sun), Powehi’s event horizon would encompass the orbit of Neptune (30 AU), and even that of Pluto (49.3 AU at its farthest extent). This enormous size, combined with the sheer energy being broadcast both from the relativistic jet and matter falling into the event horizon, made it an excellent target for the EHT team’s efforts to image a black hole.

The resulting image closely matched what high-level simulations of such a black hole illustrated: a glowing ring of gas with a stark black circle at its center, the “shadow” of the event horizon itself. This image not only provides researchers with valuable data on the events going on around the black hole, but it also provides further validation for Einstein’s Theory of Relativity.

“Once we were sure we had imaged the shadow, we could compare our observations to extensive computer models that include the physics of warped space, superheated matter and strong magnetic fields. Many of the features of the observed image match our theoretical understanding surprisingly well,” explains Paul T.P. Ho, a member of the EHT Board and Director of the East Asian Observatory. “This makes us confident about the interpretation of our observations, including our estimation of the black hole’s mass.”

Although only images of Powehi have been released, the EHT team is also attempting to image the supermassive black hole at the center of our own galaxy, known as Sagittarius A* (Sgr A*). Sgr A*, however, turned out to be much harder to image: because of Powehi’s sheer size, changes in the events around the event horizon unfold over the course of weeks, allowing astronomers ample time to resolve the individual images needed to complete the project.

However, Sgr A*’s comparatively small size means that similar events occur in only a fraction of that time, often occurring overnight, making imaging of our own black hole much more difficult. A similar technique was successfully employed late last year to image clumps of gases orbiting Sgr A*, circling its event horizon at nearly one-third the speed of light.

More observatories are expected to be added to the EHT network by the end of next year; along with continued improvements to the VLBI image combination technique, these upgrades are expected to vastly improve the resolution of the Event Horizon Telescope project’s imaging capabilities, allowing us to probe deeper into the hidden corners of our universe.

Subscribers, to watch the subscriber version of the video, first log in then click on Dreamland Subscriber-Only Video Podcast link.
2019-04-17
Previous Headline News Post: Catastrophe in Paris: Notre Dame is Gutted
Next Headline News Post: A Tough Season: The First Three Months of 2019 Saw Record-Breaking Weather Across the U.S.