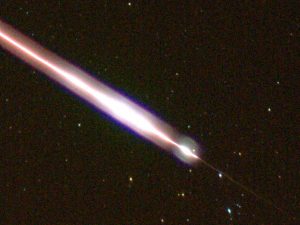 The five key chemical compounds needed to form our biology’s genetic code have been discovered in a group of meteorites that fell to Earth over the course of the last century. This discovery bolsters the theory that the building blocks of life may have arrived from outside of the Earth early in the planet’s history on asteroids or comets.

The theory, known as panspermia, posits that the genetic code responsible for the proliferation of Earth’s biological life did not form here, but rather somewhere else in the cosmos. Although there is presently no known way to verify such a theory, the fact that microbes can survive in the otherwise unforgiving environment of outer space has been established, and life on Earth took hold surprisingly early in its 4.55-billion-year history, forming less than 500 million years after the planet’s formation—and possibly even sooner.

The three meteorites that these compounds, nitrogen-containing biological compounds called nucleobases, were discovered in were recovered from various parts of the globe: the earliest was found on a farm near Lake Murray in Oklahoma in 1933; another fell near the Australian village of Murchison in 1969; and the third was recovered in 2000 near Tagish Lake in Canada’s province of British Columbia.

Deoxyribonucleic acid and ribonucleic acid (DNA and RNA, respectively) are formed from five nucleobases; there are five of these nucleobases, namely adenine, cytosine, guanine, thymine, and uracil; their initials make up the A, C, G, T and U referred to in genetic code. These compounds’ chemical structures enable them to form base pairs that stack one upon the other to form the familiar helical structures of DNA and RNA.

Three of these nucleobases had been found in these meteorites before, but without a complete set the discovery would only partially account for how the genetic code that dominates our planet came to be. Recent advances in chemical detection technology allowed the researchers to revisit the same rocks, but to examine them down to a resolution capable of measuring their chemical components on a scale of parts per trillion.

The paper theorizes that some of the nucleobases may have formed from photochemical reactions between compounds in interstellar ice and cosmic radiation—a process observed in ice formations here on Earth—and later collected into the asteroids that eventually fell to Earth as the meteorites that were recovered and studied.

While this discovery isn’t a smoking gun pointing to an extraterrestrial origin for our biology, it does cement the panspermia theory as a scenario that legitimately could have occurred.

“There is still much to learn about the chemical steps that led to the origin of life on Earth—the first self-replicating system,” according to study co-author Danny Glavin, an astrobiologist with NASA’s Goddard Space Flight Center. “This research certainly adds to the list of chemical compounds that would have been present in the early Earth’s prebiotic [existing before the emergence of life] soup.”

Subscribers, to watch the subscriber version of the video, first log in then click on Dreamland Subscriber-Only Video Podcast link.
2022-05-18
Previous Headline News Post: We Now Have an Image of the Supermassive Black Hole at the Center of Our Own Galaxy
Next Headline News Post: Congress Holds First Hearing on UAP Since Closing Blue Book