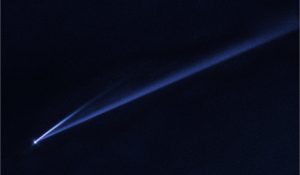 Earth had a close brush with a large “city-killer” asteroid on July 25, when a pyramid-sized rock whizzed by at less than one-fifth the distance to the Moon at nearly 25 km per second (15.5 miles per second). While not big enough to be a civilization ender, this asteroid had the size and speed to obliterate a city if it happened to hit one, but that isn’t the disturbing aspect of this 10-megaton rock: the problem is that this asteroid wasn’t detected until it was virtually on top of us.

Although asteroid 2019 OK was initially spotted in late June, astronomers in Brazil and the US hadn’t enough data to properly plot the asteroid’s orbit until it was disturbingly close to us, with the final orbital data issued by the International Astronomical Union’s Minor Planet Center a mere three hours before the asteroid’s close pass. New astronomical objects need to be observed over time to determine the nature of their movement; the longer the time taken to plot the orbit, the more accurate that plot is.

“It snuck up on us pretty quickly,” exclaimed Michael Brown, an associate professor in Australia with Monash University’s School of Physics and Astronomy, in an interview with The Washington Post. He later noted, “People are only sort of realizing what happened pretty much after it’s already flung past us.”

Although it was traveling marginally slower than the Chelyabinsk meteor, 2019 OK’s size would add a substantial amount to its potential explosive force, were it to strike the Earth, “perhaps in the ballpark of 10 megatons of TNT,” according to Brown , similar in yield to 1952’s Ivy Mike nuclear test. Certainly not the epoch-ending force that did the dinosaurs in, but the “city-killer” nickname would certainly be earned, if it were to explode near a populated area.

But how did asteroid hunters fail to spot such a potentially dangerous object until it was right next to us? As asteroid hunters have honed their detection techniques, they’ve identified what they estimate to be at least 90 percent of the really big civilization-ending asteroids; thankfully, in this case, bigger threats are easier to spot, due to their size. Conversely, smaller objects, like 2019 OK, are harder to detect, although their smaller size means that they pose less of a threat.

“Nothing this size is easy to detect,” according to Alan Duffy, lead scientist at the Royal Institution of Australia. “You’re really relying on reflected sunlight, and even at closest approach [2019 OK] was barely visible with a pair of binoculars.”

2019 OK also has a highly-elliptical orbit that sees it loop between the orbits of Mercury and Venus, and out as far as halfway between Mars and Jupiter, so most of the time the asteroid is nowhere near Earth. “It’s faint for a long time,” Brown explained. “With a week or two to go, it’s getting bright enough to detect, but someone needs to look in the right spot. Once it’s finally recognized, then things happen quickly, but this thing’s approaching quickly so we only sort of knew about it very soon before the flyby.”

According to Duffy, 2019 OK’s surprise flyby stresses the importance of investing in a “global dedicated approach” to asteroid detection, because “sooner or later there will be one with our name on it. It’s just a matter of when, not if.”