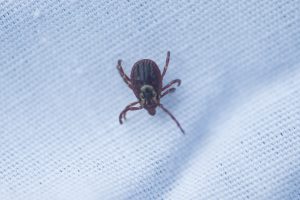 The US House of Representatives has voted to order the US Department of Defense Inspector General to disclose to Congress whether or not the Pentagon conducted Cold War-era experiments aimed at weaponizing disease-carrying insects, including ticks that carry Lyme disease, and if so whether or not any of these insects had been released—accidentally or otherwise—into the wild.

The Cold War had seen the concoction of numerous creative schemes by governments around the world to cause problems for their adversaries, such as the CIA’s infamous “exploding cigar” plot to assassinate Cuban President Fidel Castro, so the idea that the DoD might have experimented with the concept of using insects as a way of disseminating pathogens isn’t exactly a far-fetched conspiracy theory. And now, the advance of global warming is promoting the spread of numerous insect-borne diseases, such as West Nile, dengue fever and Lyme disease, into regions where their six-legged hosts were previously unable to thrive.

The vote, proposed by Rep. Christopher H. Smith (R-NJ) and adopted as an amendment during the House debate on the fiscal 2020 defense authorization bill, says that the inspector general “shall conduct a review of whether the Department of Defense experimented with ticks and other insects regarding use as a biological weapon between the years of 1950 and 1975.”

If it turns out that such experiments did indeed take place, then the Inspector General will be required to provide the House and Senate Armed Services committees with a report regarding the scope of the experiments, and “whether any ticks or insects used in such experiments were released outside of any laboratory by accident or experiment design.”

Smith was concerned over reports that Pentagon researchers, working in facilities such as Fort Detrick in Maryland and New York’s Plum Island, may have infected host insects not only as a potential way to deliver biological weapons, but also to find ways to protect US troops from such attacks. Research into biological weapons was banned by President Richard Nixon in 1969, but research into countermeasures against insect-borne diseases may have continued.

Smith, a founding co-chair of the Congressional Lyme Disease Caucus, says that between 300,000 and 427,000 new cases of Lyme disease occur each year, and the disease is expected to spread even further in the future. He hopes that the disclosure of any past experimentation on disease-carrying insects the Pentagon may have carried out will offer new insights into fighting this debilitating disease.

“We need to find out: is there anything in this research that was supposedly done that can help us to find information that is germane to patient health and combating the spread of the disease,” according to Pat Smith, president of the Lyme Disease Association, speaking in an interview regarding the vote.