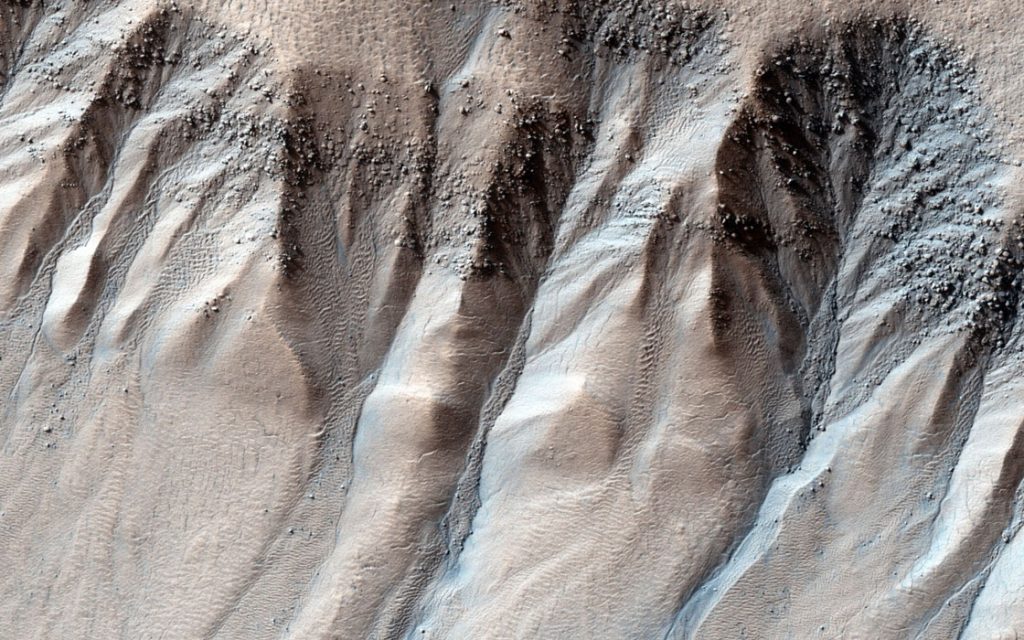 A new study comparing the geological features of both Earth and Mars has discovered that Mars’s past climate may have been much cooler than scientists have traditionally assumed, painting a picture of an ancient Martian landscape covered in glaciers, rather than the flowing rivers of liquid water thought to carve their signatures into the surface of the Red Planet.

A team of Canadian geophysicists ran their study using new techniques that compare Martian geological features, specifically the planet’s thousands of valleys, with their counterparts on Earth, in order to improve our understanding of how these features were formed. But the shapes of the 10,000 Martian valleys that were analyzed didn’t match the patterns of those formed by erosion from flowing water on Earth; rather, they had much more in common with the channels cut by meltwater that formed under the glaciers that once blanketed the Canadian Arctic Archipelago.

“For the last 40 years, since Mars’s valleys were first discovered, the assumption was that rivers once flowed on Mars, eroding and originating all of these valleys,” explains the study’s lead author, Anna Grau Galofre, with the University of British Columbia’s Department of Earth, Ocean and Atmospheric Sciences. “But there are hundreds of valleys on Mars, and they look very different from each other. If you look at Earth from a satellite you see a lot of valleys: some of them made by rivers, some made by glaciers, some made by other processes, and each type has a distinctive shape. Mars is similar, in that valleys look very different from each other, suggesting that many processes were at play to carve them.”

Galofre’s team singled out Canada’s Devon Island as an appropriate comparison to use when analyzing the Martian landscape, as it “is a cold, dry, polar desert, and the glaciation is largely cold-based,” according co-author Gordon Osinski, a professor in Western University’s department of earth sciences and Institute for Earth and Space Exploration.

Although it has been traditionally accepted that ancient Mars was home to a warm, wet climate that allowed liquid water to flow across its surface in volumes sufficient to carve the planet’s massive system of valleys into the surface, this theory always came with a snag: such a climate would have to have occurred at a time early in the Solar System’s development, when the Sun’s output was thirty percent less than what it is today. Earth’s geology presents a similar problem, referred to as the faint young Sun paradox, where the known combination of solar output and greenhouse gases present in Earth’s early atmosphere could not support high enough temperatures to allow for liquid water to form on the surface.

But this new study appears to solve this puzzle, at least for Mars, especially considering Mars’s greater distance from the Sun: ancient Mars, at least its southern highlands, were once blanketed by massive glaciers.

“We tried to put everything together and bring up a hypothesis that hadn’t really been considered: that channels and valleys networks can form under ice sheets, as part of the drainage system that forms naturally under an ice sheet when there’s water accumulated at the base,” Galofre explains.

The team suspects that such an environment may have actually provided a more stable environment for potential Martian life forms, with a stable source of water underneath the glaciers, and the thick ice itself would provide protection against solar radiation, something that Mars’s surface would have originally been protected from by the planet’s magnetic field, a feature that was otherwise lost billions of years ago.

Subscribers, to watch the subscriber version of the video, first log in then click on Dreamland Subscriber-Only Video Podcast link.
2020-08-09
Previous Headline News Post: Young Children Are Less Likely to Spread the Coronavirus—but May Carry More of the Disease
Next Headline News Post: Humanity Is Heading for a “Jaw-Dropping” Decline in Population