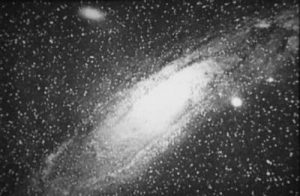 Quantum researchers have managed to simulate the reversal of time at the quantum scale, using IBM’s quantum computers. Although the effect is simulated, the implication of this experiment is that the arrow of time doesn’t necessarily have to flow in one direction, but can be reversed, allowing what once was to be once again.

The passage of time, at least here in the macroscopic world that we live in, travels in only one direction (that’s forward for those of us that perceive otherwise), and that effect is marked by the concept of entropy, in which isolated systems continually fall into an increasing state of disorder, like the erosion of a mountain into smaller rocks and sand, or the scattering of a set of racked billiard balls after the break. Interestingly, entropy is virtually the only quantity in the physical sciences that requires the arrow of time to move in one direction; otherwise, the application of most physical laws can work just as well backwards as they do forward. An extremely simple mathematical example would be that 1+2=3, but the equation also works in reverse: 2+1=3.

Quantum physicists from the Moscow Institute of Physics and Technology, along with colleagues in Switzerland and the U.S, decided to see if they could reverse the state of disorder in an isolated system, for instance in a single electron, effectively hitting the rewind button on entropy.

“Suppose the electron is localized when we begin observing it. This means that we’re pretty sure about its position in space,” explains study co-author Andrey Lebedev from MIPT and ETH Zurich. “The laws of quantum mechanics prevent us from knowing [its position] with absolute precision, but we can outline a small region where the electron is localized.” But with the passage of time, the boundaries of the electron become smeared over an increasingly larger area of space, indicating an increasing state of chaos associated with the particle—this is the concept of entropy at work.

Basically, over the course of the observation of the electron, the particle falls into an ever increasing state of chaos. While we don’t see the opposite happen in our everyday world, the laws of quantum mechanics don’t actually prohibit the electron from falling into a more ordered state. It would be much like billiard balls that are scattered across a table somehow falling into their racked position if the table were jarred in just the right way—an utterly implausible scenario, but certainly not an impossible one.

Armed with that improbability, the quantum scientists turned to a system that could give their proverbial pool table a jolt that had a reasonable chance to actually re-rack the balls: a quantum computer. In this case, the computer’s individual qbits (analogous to the computational “bits” used by a regular computer) would represent individual electrons: each qubit would be allowed to fall out of the well-ordered state that they would start in, and then be given a mathematical “kick” to see if they reverted back to their earlier ordered state from the resulting chaotic one.

The experiment was conducted in four stages: the first stage was to set the individual qubits to their initial “ground” state—racking the billiard balls, as it were—a highly ordered configuration that would be analogous to the localization of an electron in a small region.

In stage two, the break shot is made. The researchers allowed the ordered state of the qubits to degrade into chaos, much like how the position of our imaginary electron would appear to become smeared over an increasingly large area of space as the passage of time increases. Needless to say, this was the simplest stage, since natural entropy did all the work.

Stage three: back to the past! Once the state of the qbits had reached a sufficient state of disorder, a special program was then run that modified the state of the computer—the improbable “kick” given to the billiard table to send the balls back to their racked position—to simulate an effect on our isolated electron that would otherwise appear to be a chaotic happenstance, such as a random fluctuation in the cosmic microwave background (CMB), the faint background radiation left over from the birth of the Universe.

In stage four, the disordered state of the qbits would revert to their initial state, simulating the reversal of time in our hypothetical electron to an earlier, more ordered state. Or, returning to our billiard table analogy, the improbable circumstance of a movement in the table causing the balls to return to their racked position.

Each iteration of the experiment had a high success rate, with 85% of the cases returning to their ground state when two qubits were used. However, when three qbits were used, the experiment only had a 50/50 chance of succeeding, apparently due to errors caused by imperfections present in the computers themselves.

But what does this mean in terms of real-world applications? “Our findings break ground for investigations of the time reversal and the backward time flow in real quantum systems,” according to the study paper. The research team predicts that this experiment could also help improve future quantum computing systems. “Our algorithm could be updated and used to test programs written for quantum computers and eliminate noise and errors,” according to Lebedev.

Subscribers, to watch the subscriber version of the video, first log in then click on Dreamland Subscriber-Only Video Podcast link.
2019-03-22
Previous Headline News Post: It Turns Out that Humans Can Sense the Earths Magnetic Field
Next Headline News Post: The 173 Kiloton Explosion that Nobody Noticed