Paradoxically, the Loss of Key Vocal Structures Spurred the Evolution of Human Speech 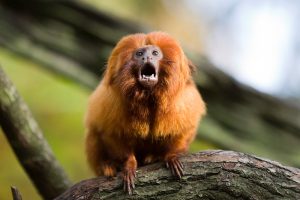 Researchers have identified the evolutionary changes to our larynx that enables humans to produce the complex sounds necessary for the development of speech, while our primate relatives are unable to do so, despite having similar physical vocal structures. Paradoxically, the changes that occurred didn’t involve an increase in the complexity of our physiology, but rather a simplification of it.

When compared to those of other primates, there were two differences in our species’ larynx, more commonly known as a voice box, identified by the researchers: the first is that humans lack small, ribbon-like extensions of the vocal cords that are present in the 43 other primate species studied called a vocal membrane; the second is that other primates have balloon-like air sacs that enable some apes and monkeys to produce loud, resonant bellows without hyperventilating, another structure that humans lack.

Although it seems counterintuitive, it was the simplification of our larynx through the loss of these anatomical structures that stabilized the sounds humans can produce, enabling our ancestors to develop complex speech, and through that the ability to articulate thoughts, concepts and feelings through speech and song.

“I think it’s pretty interesting that sometimes in evolution ‘less is more’— that by losing a trait you might open the door to some new adaptations,” remarks study co-author W. Tecumseh Fitch, an evolutionary biologist with the University of Vienna in Austria.

“We argue that the more complicated vocal structures in nonhuman primates can make it difficult to control vibrations with precision,” explains the study’s lead author Takeshi Nishimura, a primatologist with Kyoto University’s Center for the Evolutionary Origins of Human Behavior.

This unique stability allowed humans to develop a more refined vocal pitch control, and to be able to produce longer, more stable sounds. These changes to our larynx would have occurred sometime after the evolutionary split that occurred between humans and chimpanzees 6-7 million years ago.

“Vocal membranes allow other primates to make louder, higher-pitched calls than humans—but they make voice breaks and noisy vocal irregularity more common,” according to Fitch. He theorizes that this simplification of the larynx first developed in Australopithecus, a genus of hominins thought to be humanity’s immediate ancestor that first appeared about 3.85 million years ago, although it also could have appeared later in one of our closer Homo ancestors.

It is also important to remember that although these particular modifications appear to be pivotal in the development of human speech, there were a number of other changes that needed to happen, such as the position of the larynx in our throats, and the eventual development of the related language centers in our brains.

“Speech and language are critically related, but not synonymous,” according to primatologist and psychologist Harold Gouzoules of Emory University; although Gouzoules was not involved in the study itself, he wrote a commentary that accompanied the study. “Speech is the audible sound-based manner of language expression—and humans, alone among the primates, can produce it.”

Subscribers, to watch the subscriber version of the video, first log in then click on Dreamland Subscriber-Only Video Podcast link.
2022-08-15
Previous Headline News Post: Global Warming has Stolen Precious Milliseconds from Our Days
Next Headline News Post: A Legendary Photograph from the Calvine UFO Case Appears to Have Been Recovered