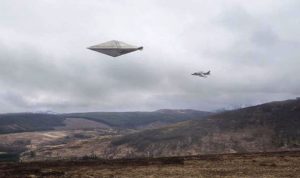 One of the highest-quality photographs known of a UFO has been recovered, after having disappeared during a government investigation that took place into the sighting more than three decades ago. Described as “by far the best UFO photograph I have ever seen” by UFO researcher Dr David Clarke, the photograph was stashed away by the Royal Air Force officer that originally investigated the case, hidden in his desk from both the public and the government—until now.

The photograph—one of a series of six—was taken on August 4, 1990 by a pair of anonymous individuals while hiking along a hillside near the village of Calvine in the Scottish Highlands. The witnesses saw a large, diamond-shaped object hovering nearby, along with multiple RAF fighter jets making close passes; the 100-foot craft remained in view for about ten minutes before shooting off straight up into the sky.

The witnesses filed a report, along with the photographs, of the sighting at the now-closed joint RAF/Royal Navy Headquarters at Pitreavie. They also sent an account of their encounter, along with the original negatives, to the Daily Record, a major Scottish newspaper. When the journalist in charge of the story contacted the Ministry of Defence for comment, they were asked to send the negatives to the MOD for analysis; the reporter did so, but did not think to make copies or prints of the negatives, and for unknown reasons the Daily Record did not run the story.

The existence of the Calvine photographs were first brought to the public’s attention by former Ministry of Defence official Nick Pope in his 1996 book Open Skies, Closed Minds, where Pope recounted hearing about the Calvine case from his predecessor at the MOD’s “UFO Desk”, including enlarged prints of the original negatives that had been part of an extensive analysis of the case, a case that had been classified as top secret.

“The analysis was nothing short of sensational,” Pope recounted in an October 2020 commentary for the Scottish Sun. “The photos hadn’t been faked.”

“They showed a structured craft of unknown origin, unlike any conventional aircraft. There was no fuselage, no wings, no tail, no engines and no markings of any sort,” Pope continued.

“Because the photos had been taken in daylight with the surrounding countryside visible, MoD boffins could make some calculations about the mystery object’s size. It turned out to be nearly 100 feet in diameter,” according to Pope. Although a fighter jet was visible in the photograph, it could not be determined if the jets seen were there in response to the craft or if their presence was coincidental—the area is a route frequently used by RAF aircraft. Pope’s predecessor had handled the case himself, but Pope was also “staggered to learn that it hadn’t proved possible to trace the aircraft.”

In 2009 the trail of the Calvine photographs was picked up by Dr David Clarke, an associate professor from Sheffield Hallam University and curator for the MoD UFO files project at The National Archives. After 13 years of research, Clarke managed to track down retired RAF officer Craig Lindsay, who personally interviewed the witnesses; astonishingly, Lindsay had also secretly kept one of the photographs that he was ordered to turn over to the MoD.

That photograph had remained in Lindsay’s desk for 32 years. “I have been for waiting for someone to contact about this for more than 30 years,” he said when Clarke contacted him about the case. The photograph “is clearly a structured craft of unknown origin. It looks other-worldly and unlike any conventional aircraft,” according to Clarke, and “it is by far the best UFO photograph I have ever seen.” After receiving the photograph, Clarke filed it in Sheffield Hallam University archives; the photograph can be viewed in an article about the Calvine case at UAP Media UK.

Clarke had the photograph analyzed by Andrew Robinson, a senior lecturer in photography at Sheffield Hallam University. Robinson concluded that the photograph is of a genuine object, and if faked, would require the use of “expensive, sophisticated equipment and flying models,” according to Clarke.

“My conclusion is that the object is definitely in front of the camera, that is, it’s not a fake produced in post-production, and its placement within the scene appears to be approximately halfway between the foreground fence and the plane in the background,” Robinson told Clarke.

Although the statute on the Calvine case’s classification would have run out in 2020, the MOD has re-classified certain details of the case as ‘secret’ until 2076, due to “privacy concerns”. Numerous details regarding the case remain unanswered: was there a DSMA-Notice (Defence and Security Media Advisory Notice, colloquially known as a ‘D-Notice’) issued to prevent the Daily Record from running the story? Was the object that the anonymous witnesses saw an extraterrestrial craft, or a top-secret project being developed by either the UK or US government? And why is the MOD still treating this case with so much secrecy nearly a third of a century after the sighting?

Subscribers, to watch the subscriber version of the video, first log in then click on Dreamland Subscriber-Only Video Podcast link.
2022-08-18
Previous Headline News Post: Paradoxically, the Loss of Key Vocal Structures Spurred the Evolution of Human Speech
Next Headline News Post: Whitley and his Cabin Experiences are Featured in a New Documentary