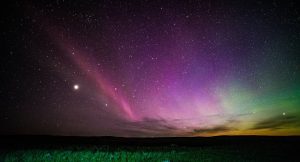 Researchers believe they have discovered the cause behind a mysterious, yet beautiful, aurora-like phenomenon named STEVE. Their findings confirm that STEVE is not only a phenomenon distinct from the more familiar Aurora borealis and Aurora australis that extend from the Earth’s Arctic and Antarctic regions, respectively, but also that STEVE is actually made up of two distinct phenomena.

Astronomers at Canada’s University of Calgary brought this phenomenon to the public’s attention in 2017, after learning of the mauve and green lights from citizen scientists’ posts on social media. Initially nicknaming the phenomenon “Steve”—a reference to the animated film “Over the Hedge”, where the characters use the name to describe a phenomenon that they don’t understand—the researchers later backronymed STEVE to stand for “Strong Thermal Emission Velocity Enhancement”.

In a study published in 2018, the researchers found that STEVE consisted of a river of hot gas (3,000°C / 5,432°F) that runs through an upper layer of the atmosphere called the thermosphere at an altitude of 300 kilometers (186 miles). Although it is only 25 kilometers (15.5 miles) wide, STEVE’s length runs for thousands of kilometers (or miles), and flows at 6 kilometers (3.7 miles) per second, despite the surrounding air only moving at about 10 meters (32.8 feet) per second.

Further investigation has uncovered not only the mechanism behind STEVE’s unearthly glow, but also that it is actually two distinct phenomena, split between the meandering mauve ribbon and its segmented green “picket fence” appearance.

“Aurora is defined by particle precipitation, electrons and protons actually falling into our atmosphere, whereas the STEVE atmospheric glow comes from heating without particle precipitation,” explains Bea Gallardo-Lacourt, a space physicist at the University of Calgary and co-author of the new study. “The precipitating electrons that cause the green picket fence are thus aurora, though this occurs outside the auroral zone, so it’s indeed unique.”

In a traditional aurora, charged particles from the solar wind and the Earth’s magnetosphere enter the upper atmosphere near the poles where it charges the nitrogen and oxygen present there, causing the gases to glow. STEVE’s glow, on the other hand, occurs when a flowing stream of charged particles in the ionosphere collide, causing friction that heats the particles enough to emit a mauve light. Basically, STEVE’s glow comes from a process more akin to the mechanism that lights a traditional incandescent light bulb, while aurorae work more like a fluorescent tube.

The green “picket fence” form of STEVE, so-named because to its segmented appearance, is generated by a different process altogether. This effect is more closely related to traditional aurorae in that it is generated by energetic electrons streaming in from outer space, however these particles hit the atmosphere farther south than the protons and electrons that cause aurorae, being knocked out of the magnetosphere into the ionosphere by high-frequency waves, where they produce their striped green glow. Interestingly, the picket fence form of STEVE occurs in both the northern and southern hemispheres simultaneously, indicating that the source of the charged particles comes from high enough above the Earth’s surface to affect both hemispheres at the same time.

The involvement of citizen scientists has proven to be invaluable in both the discovery of STEVE and the research uncovering the mechanism behind the phenomenon, providing photographic data coupled with precise time and location data to accompany the images. “As commercial cameras become more sensitive and increased excitement about the aurora spreads via social media, citizen scientists can act as a ‘mobile sensor network,’ and we are grateful to them for giving us data to analyze,” according to Toshi Nishimura, a space physicist at Boston University and lead author of the new study.

Subscribers, to watch the subscriber version of the video, first log in then click on Dreamland Subscriber-Only Video Podcast link.
2019-05-23
Previous Headline News Post: Indian Army on the Trail of the Yeti
Next Headline News Post: Welcome to the NEW Unknown Country!