Indian Army on the Trail of the Yeti 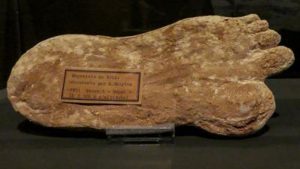 An expedition mounted by the Indian Army has released a set of images of what they believe to be footprints of the enigmatic Yeti, a large ape-like creature with white fur that is said to inhabit the Himalayan mountains.

“For the first time, an #IndianArmy Moutaineering Expedition Team has sited Mysterious Footprints of mythical beast ‘Yeti’ measuring 32×15 inches close to Makalu Base Camp on 09 April 2019. This elusive snowman has only been sighted at Makalu-Barun National Park in the past,” the Additional Directorate General of Public Information (ADGPI) announced in their April 29 tweet.

Although the pictures of the alleged footprints themselves are clear, the tracks are unfortunately less clear, appearing to have faded. The tracks provide the impression of a trail made by a bipedal creature with a long stride and large foot size, walking in a catwalk-like manner, with the footprints appearing in-line, rather than side-by-side.

“We will share whatever we get with the domain experts to analyze. We will be contacting the team on the satphone in the evening for more details about it. The idea is to find out more, to look for an answer,” an anonymous army official told the ADGPI, although no new details have been communicated thus far.

The ADGPI’s post drew a flurry of derision from social media, with many posts mocking the Indian Army for entertaining the idea that these imprints might have been made by the elusive cryptid, although some of the more helpful posts offered more mundane explanations in that the tracks may have been made by a bear and distorted by the wind.

Regardless, the Yeti, nicknamed the “Abominable Snowman” in the west, is an integral part of the history and mythology of the cultures that inhabit the Himalayas.