A U.S. Navy spokesperson has verified that the three gun camera videos released in 2017 and 2018 by the To The Stars Academy of Arts & Science are indeed legitimate footage of UFOs, or as the Navy prefers to refer to them, “unidentified aerial phenomena” (UAP). The Navy source also stated that the videos in question were never cleared for release to the public, despite previous claims by TTSAAS director Luis Elizondo. 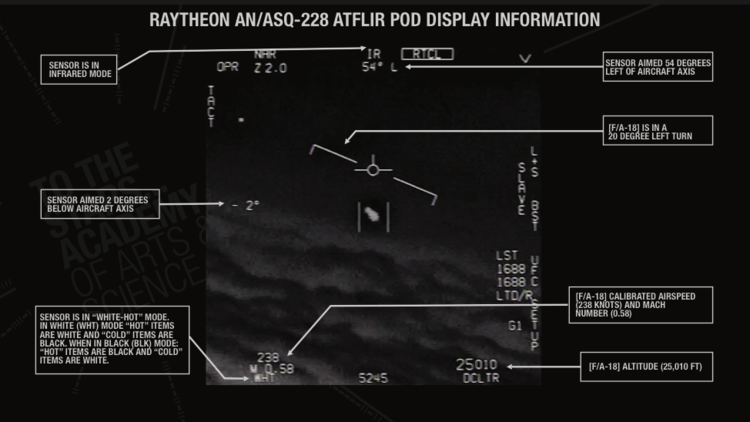 “The Navy designates the objects contained in these videos as unidentified aerial phenomena,” stated Joseph Gradisher, official spokesperson for the Deputy Chief of Naval Operations for Information Warfare, in an interview with The Black Vault’s John Greenewald, Jr. This is the first official acknowledgment of the legitimacy of the three videos, known colloquially as “Gimbal”, “Go Fast” and “FLIR1” (also known as “Tic-Tac”).

This is also an admission that despite the vast resources available to the United States Armed Forces, the U.S. Navy has no idea as to what these objects are—objects that exhibit flight characteristics that would be impossible for a conventional aircraft to perform.

“The most powerful military doesn’t know what these objects are,” Greenewald told the Washington Post. “That doesn’t mean aliens, or that they don’t have some plausible logical explanation. But … admitting that they see things in the sky and they can’t identify them, that to me is the most amazing part of this.”

Gradisher did caution that the videos had not been “declassified” by the government and should never have been released to the public, despite earlier claims made by the former head of the Pentagon’s Advanced Aerospace Threat Identification Program (AATIP), Luis Elizondo. The DD1910 form originally submitted to the Department of Defense by Elizondo only stated that the videos would be used for “research and analysis ONLY and info sharing with other USG and industry partners for the purposes of developing a database to help identify, analyze, and ultimately defeat UAS threats.”

When The Black Vault asked Gradisher why the U.S. Navy prefers the phrase “UAP” over the more traditional “UFO” label, he replied, “The ‘Unidentified Aerial Phenomena’ terminology is used because it provides the basic descriptor for the sightings/observations of unauthorized/unidentified aircraft/objects that have been observed entering/operating in the airspace of various military-controlled training ranges.”

Gradisher later clarified that UAP “was not a new term and that the Navy preferred it to the more popular ‘UFO’ because the latter comes with cultural stigma that might discourage pilots from reporting such incidents for fear of being labeled, well, kooky,” according to the Washington Post. The Navy announced in April of this year that they were drafting new guidelines that would enable its personnel to report encounters with UAPs. Protracted encounters between U.S. Navy personnel that occurred in 2004 and 2014have also drawn the interest of lawmakers in both Congress and the Senate.