More Evidence for Ancient Oceans, Rivers and Groundwater on Mars has been Revealed 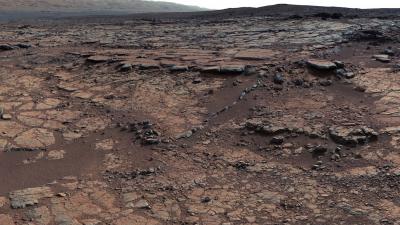 The European Space Agency’s (ESA) Mars Express orbiter has uncovered signs that Mars once had a vast network of waterways, including a planet-spanning ocean in its northern hemisphere, and an extensive network of rivers that carved majestic canyons through the ancient Martian landscape.

Using its Mars Advanced Radar for Subsurface and Ionosphere Sounding (MARSIS) radar system, Mars Express is able to see deep into the Martian soil, down to a depth of 60-80 meters (197-262 feet), with a high enough resolution to provide researchers with detailed data on what the individual layers of soil and rock look like.

“Throughout all of this depth, we see the evidence for sedimentary material and ice,” according to Wlodek Kofman, leader of the radar team at France’s Institut de Planétologie et d’Astrophysique de Grenoble (Institute of Planetology and Astrophysics of Grenoble (IPAG)). In the MARSIS data, the research team found the Red Planet’s northern plains to be covered in low-density formations. “We interpret these as sedimentary deposits, maybe ice-rich,” explains Jérémie Mouginot, with the University of California, Irvine, and also IPAG. “It is a strong new indication that there was once an ocean here.”

“I don’t think it could have stayed as an ocean long enough for life to form,” Mouginot cautions, regarding the second ocean. He believes the later ocean may have only lasted for about a million years before re-freezing in underground deposits, or vaporizing into the planet’s atmosphere.

However, we do have evidence that liquid water may have existed on the surface of Mars for at least a billion years, as found by NASA’s Curiosity rover in 2017, so there’s a high probability that these oceans may have lasted for much longer. Indeed, a lake of still-liquid water may still exist under the planet’s southern polar ice cap.

But oceans need rivers to feed them, and Mars Express has found evidence of those as well: images of a large valley east of Mars’ largest impact crater, Huygens Crater, shows the unmistakable signs of flowing water, in the form of dendritic valleys (Greek word for tree, dendron, is an excellent way to describe the shape of these valleys) that are dead-ringers for river valleys on Earth. Some of the chasms imaged by the orbiter are up to two kilometers (1.25 miles) across and 200 meters (660 feet) deep.

Regardless of when the surface of Mars dried up, there is still evidence that the planet didn’t lose all of its water, at least right away: also using Mars Express data, Researchers at the Netherlands ‘ University of Utrech have found evidence of what may have been an extensive groundwater network underneath the planet’s surface. While examining the data from 24 Martian craters more than 4 kilometers (2.5 miles) deep surveyed by the orbiter, the researchers found evidence of links between surface features that appear to have been shaped by flowing water, and groundwater upwelling that occurred in these deep basins.

“Early Mars was a watery world, but as the planet’s climate changed this water retreated below the surface to form pools and ‘groundwater’,” according to Francesco Sales, with the university’s Faculty of Geoscience. “We traced this water in our study, as its scale and role is a matter of debate, and we found the first geological evidence of a planet-wide groundwater system on Mars.”

Next year, the ExoMars mission, a joint ESA-Roscosmos project, will be launched for a scheduled touchdown on Mars in 2021. In addition to atmospheric and water-sensing eqipment, the lander will ferry a rover that will deploy sensors that will search for signs of biomolecules and other biosignatures that might have been left behind by any lifeforms that may have once inhabited Mars’ vast waterways.

Image Credit:  “Bedrock at this site added to a puzzle about ancient Mars by indicating that a lake was present, but that little carbon dioxide was in the air to help keep a lake unfrozen.” Image credit: NASA/JPL-Caltech/MSSS

Subscribers, to watch the subscriber version of the video, first log in then click on Dreamland Subscriber-Only Video Podcast link.
2019-03-08
Previous Headline News Post: For the First Time Ever, a Category-5 Storm Formed in the Northern Hemisphere in February
Next Headline News Post: Two New Studies Increase the Odds that Planet Nine Actually Exists