For the First Time Ever, a Category-5 Storm Formed in the Northern Hemisphere in February 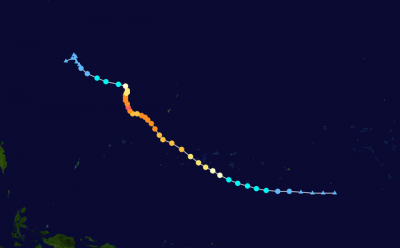 For the first time in recorded history, a cyclone that formed in the Northern Hemisphere during the month of February, Typhoon Wutip, reached the strength of a category-5 storm. While this storm isn’t necessarily the strongest on record, the fact that a category-5-equivalent super typhoon, with sustained wind speeds of 120 mph, formed this late in the Northern Hemisphere’s typhoon season could be a harbinger of how global warming might affect the length of annual cyclone seasons around the world.

The storm system that would become Typhoon Wutip formed just south of the Marshall Islands on February 16; on February 18 it was upgraded to a tropical depression, eventually reaching the equivalent of a category-4 super typhoon on the 21st, with maximum 10-minute sustained winds of 185 km/h (115 mph), 1-minute sustained winds of 250 km/h (155 mph), and a minimum central pressure of 925 hPa. The storm’s strength made it the strongest February typhoon on record, surpassing 2015’s Typhoon Higos. While still southwest of Guam, Wutip began to weaken, and was forecast to continue to peter out as it made its way along its northwest track.

Instead, the opposite occurred: Wutip began to pick up steam, and by the 25th it reached full strength as a category-5-equivalent super typhoon; its maximum 10-minute sustained winds were now 195 km/h (120 mph), with 1-minute sustained winds of 260 km/h (160 mph), with the storm’s central pressure dropping to 915 hPa. This made it the strongest February storm of any kind—typhoon, cyclone, or hurricane—ever recorded in the Northern Hemisphere in the month of February.

Wutip’s rapid intensification between February 24th and 25th is being attributed to above normal sea surface temperatures (indeed, the Pacific is currently experiencing a mild El Niño), combined with weak upper winds.

Thankfully, the current El Niño cycle doesn’t appear to be a strong one, as was the case with the back-to-back, record-breaking 2014-2016 El Niño event.

Subscribers, to watch the subscriber version of the video, first log in then click on Dreamland Subscriber-Only Video Podcast link.
2019-03-06
Previous Headline News Post: Senator Reid says the US needs to Investigate UFOs to Keep Up with China & Russia
Next Headline News Post: More Evidence for Ancient Oceans, Rivers and Groundwater on Mars has been Revealed