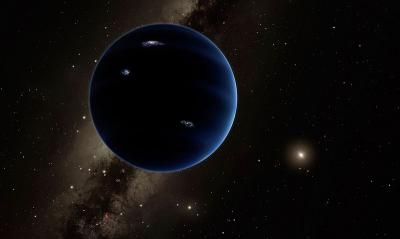 Two new studies have provided further evidence for the existence of an as-of-yet undiscovered large planet at the edge of the Solar System, known by the astronomical community as “Planet Nine“.

Having found that the orbits of a number of trans-Neptunian objects (TNOs) on the outer fringe of the Solar system were in extremely unusual orbits, California Institute of Technology astronomers Konstantin Batygin and Mike Brown proposed that these orbits were best explained by the presence of a large planet five to ten times the mass of the Earth in a orbit 13 to 26 times further out from the Sun than Neptune. Their 2014 proposal was accompanied by computer models that backed their hypothesis, and since then other evidence has also been found that may support the idea of Planet Nine, such as the slight tilt in the orbits of the Solar System’s other planets, and anomalies in the Cassini space probe’s orbit.

The first of these two new studies adds the orbital data of newly-discovered TNOs, as well as new data gathered from research into TNOs already present in Batygin and Brown’s model. The outcome of this new study was the same: the odd orbital clustering of deep Trans-Neptunian objects is best explained by a massive planet lurking at the extreme edge of the Solar System.

University of Michigan Professor of Physics and Astronomy Fred Adams, a co-author on the study, believes that we may find the elusive Planet Nine within the next 10 to 15 years. “With its proposed properties, Planet Nine is right on the edge of being observable,” according to Adams. Simply put, if we could narrow down what part of the sky the enigmatic orb is in, we could find in short order using existing telescopes. “But this is a very dim object in a very big sky,” Adams cautions. “Since we don’t know exactly where it is, you have to survey the whole sky, or at least large portions of it, in order to find the planet.”

One of the foremost criticisms brought against the Planet Nine hypothesis is that the observation of these TNO orbital clusters by Batygin and Brown were due to observational bias, the idea that they were seeing patterns in the data that weren’t actually there. The human mind is built to identify patterns to facilitate how we go about our daily lives—typically, this is a blessing for human consciousness, but it can cause problems for scientific studies—so the second study tackles this criticism, using a mathematical analysis of Batygin and Brown’s data. This new analysis found that the probability that these orbital clusters are simply random occurrences is 0.2 percent, or one in five hundred. “While explanations other than Planet Nine may someday be found, the statistical significance of this clustering is now difficult to discount,” the study concludes.

Image Credit: This artistic rendering shows the distant view from Planet Nine back towards the sun. The planet is thought to be gaseous, similar to Uranus and Neptune. Hypothetical lightning lights up the night side. Via Wikimedia Common

Subscribers, to watch the subscriber version of the video, first log in then click on Dreamland Subscriber-Only Video Podcast link.
2019-03-11
Previous Headline News Post: More Evidence for Ancient Oceans, Rivers and Groundwater on Mars has been Revealed
Next Headline News Post: A New Peak Record for CO2 has been Reached—Three Months Earlier than Usual