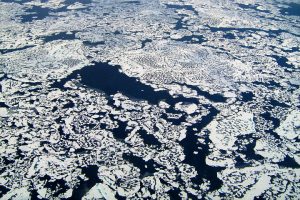 The concentration of the greenhouse gas methane in the atmosphere rose at a record-breaking rate in 2021, according to the National Oceanic and Atmospheric Administration (NOAA), jumping by 17 parts per billion (ppb) over the course of the year, beating 2020’s precipitous rise of 15.3 ppb.

The estimated 640 million tons of methane (CH4) released into the atmosphere by human activity last year increased the average concentration of this powerful greenhouse gas to 1,895.7 ppb, a level 162 percent higher than what was present during pre-industrial times, with last year’s global emissions estimated to have been 15 percent higher than what was seen during the 1984-2006 period.

“Our data show that global emissions continue to move in the wrong direction at a rapid pace,” according to NOAA Administrator Rick Spinrad. “The evidence is consistent, alarming and undeniable. We need to build a Climate Ready Nation to adapt for what’s already here and prepare for what’s to come. At the same time, we can no longer afford to delay urgent and effective action needed to address the cause of the problem—greenhouse gas pollution.”

Human activities such as agriculture and fossil fuel use account for about 60 percent of modern CH4 emissions, with natural sources, chiefly wetlands, accounting for the remainder.

The rise in atmospheric CH4 followed the continued rise in atmospheric CO2 levels—although not as immediately strong a greenhouse gas as CH4, carbon dioxide is chemically stable and doesn’t degrade like methane, meaning it can persist in the atmosphere for centuries. CO2 levels, now at levels not seen in over four million years, rose to 419.13 parts per million in 2021, and hit a new record of 421 ppm just last May.

Subscribers, to watch the subscriber version of the video, first log in then click on Dreamland Subscriber-Only Video Podcast link.
2022-06-28
Previous Headline News Post: High-powered Lasers Could Cut the Half-life of Nuclear Waste From “A Million Years to 30 Minutes”
Next Headline News Post: A Baby Mammoth Has Been Recovered From the Arctic, Only the Second Such Find in History