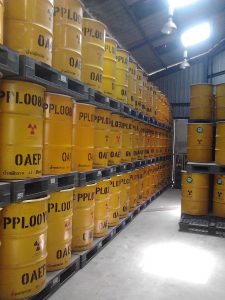 Nuclear waste: the radioactive material left over from numerous medical, industrial and military applications can persist for millions of years before its atomic structure decays into a more stable element.  Although the long-term storage of toxic byproducts can mostly keep them out of harm’s way for hundreds of thousands of years, an estimated 250,000 tons of nuclear waste is still there.

However, a Nobel laureate believes that he might be able to develop a way to transform these hazardous materials into radioactively-inert substances using high-powered laser pulses.

In 2018 Gérard Mourou, a professor at France’s École Polytechnique, received the Nobel Prize in Physics with his co-recipient Donna Strickland for their work in developing chirped pulse amplification (CPA), a technique for producing extremely brief pulses of powerful laser energy. These bursts, lasting for less than a trillionth of a second, can deliver a laser pulse with an energy exceeding 700 billion watts of power per square centimeter (3/20ths of a square inch). In addition to producing a massive amount of energy, the pulse is so short that the target material can be ablated without disturbing the surrounding matter.

This ability makes CPA an invaluable technique for making precise cuts in both medical and industrial settings — femtosecond lasers that produce light pulses that last for less than one quadrillionth of a second are used in eye surgery. But Mourou also believes the CPA technique can be used to transmute the dangerous isotopes from nuclear waste like uranium and plutonium into more benign substances that have substantially shorter half-lives, or possibly even into something that is radioactively stable.

In an interview regarding his Nobel Prize, Mourou described the concept: “take an atomic nucleus: it is made up of protons and neutrons, if you add an extra neutron or remove one, it changes absolutely everything. It is no longer the same atom, its properties will then totally change. The lifetime of this waste is fundamentally changed: it can be reduced from a million years to 30 minutes!”

The chief problem with radioactive waste is, of course, its radioactive nature, with the various radioisotopes left over from spent nuclear fuel, medical applications, rare earth mining, weapons reprocessing and other industrial processes posing a threat to human and environmental health. Although the waste that can’t be recycled is processed into a chemically-unreactive glass-like ceramic material, encased in concrete-filled stainless steel cylinders and embedded nearly a mile deep into stable geological formations… it’s still there. And although long-term storage using these nigh-indestructible containment methods is an acceptable solution — YouTube’s Kyle Hill has produced a colorful video that puts the process of radioactive storage into perspective — an ideal situation would be to render the estimated quarter-million tons that currently exists inert altogether.

The ability to either add or remove one or more neutrons from the nucleus of an atom is one that could mean the difference between an unstable substance that is emitting radioactive particles and an inert one that poses no immediate health or safety hazard. And Mourou believes that, once such a process is developed, it can be scaled to industrial levels to address the world’s current stockpile of waste, and accommodate what will be produced in the future.

“We are already able to irradiate large quantities of material in one go with a high-power laser, so the technique is perfectly applicable and, in theory, nothing prevents us from scaling it up to an industrial level,” Mourou explains. “This is the project that I am launching in partnership with the Alternative Energies and Atomic Energy Commission, or CEA, in France. We think that in 10 or 15 years’ time we will have something we can demonstrate. This is what really allows me to dream, thinking of all the future applications of our invention.”

Mourou cautions that there is a lot of work to be done and numerous challenges to be overcome before a viable transmutation process using CPA will be ready, hence his prediction that the process won’t be available for another decade and a half. But in the meantime, our radioactive waste isn’t going anywhere. But Mourou remains optimistic about his work.

“I think about what it could mean all the time,” Mourou remarks. “I don’t overlook the difficulties that lie ahead. I dream of the idea, but we will have to wait and see what happens in the years to come.”