A Baby Mammoth Has Been Recovered From the Arctic, Only the Second Such Find in History 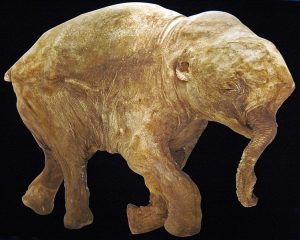 A well-preserved woolly mammoth calf has been excavated in the Canadian Arctic, the first time such a discovery has been made in North America, and only the second baby mammoth to be recovered in the world, an event that is being called the “most important discovery in paleontology in North America” by the recovery’s lead scientist.

“She has a trunk. She has a tail. She has tiny little ears. She has the little prehensile end of the trunk where she could use it to grab grass,” according to the Yukon government’s paleontologist, Dr. Grant Zazula.

The calf is estimated to have been 30 to 35 days old when she died, somewhere between 35,000 and 40,000 years ago, when she was unable to escape a pool of mud that she had become trapped in.

The discovery was made by a miner operating a front-end loader in a gold mine owned by Treadstone Mining in Eureka Creek in Canada’s Yukon Territory. The miner was digging through a layer of muck when his shovel struck something, prompting him to alert his supervisor; the subsequent discovery, that of the body of a baby mammoth, brought the mine’s operations to a halt.

Within half an hour Zazula was notified of the find; shortly after that, two geologists, one with the Yukon Geological Survey and another with the University of Calgary, were dispatched to the scene to recover the body and record the geological makeup of the site. And the team was fortunate that they acted as fast as they did, since a sudden storm struck shortly after the geologists arrived.

“And the amazing thing is, within an hour of them being there to do the work, the sky opened up, it turned black, lightning started striking and rain started pouring in,” according to Zazula. “So if she wasn’t recovered at that time, she would have been lost in the storm.”

Although numerous mammoths have been found preserved in the Arctic permafrost, Nun cho ga, meaning “big baby animal” in Hän, the language spoken by the Trʼondëk Hwëchʼin, is only the second calf to be recovered, following the 2007 discovery of a month-old female calf that died 41,800 years ago in Siberia’s Yamal Peninsula. The mine where the discovery was made is on Tr’ondëk Hwëch’in land—hence Nun cho ga’s Hän name—and by no small coincidence she was unearthed on June 21, Canada’s National Indigenous Peoples Day. Shortly after the recovery of the calf, a group of Tr’ondëk Hwëch’in elders held a prayer and blessing ceremony as the tarp containing Nun cho ga was opened.

“We must all treat it with respect. When that happens, it is going to be powerful and we will heal,” added Tr’ondëk Hwëch’in elder Peggy Kormendy.

Subscribers, to watch the subscriber version of the video, first log in then click on Dreamland Subscriber-Only Video Podcast link.
2022-07-01
Previous Headline News Post: Levels of Powerful Greenhouse Gas Methane Increased at a Record Rate Last Year
Next Headline News Post: A Hungry Jupiter May Have Cannibalized Many of the Solar System’s Early Planets