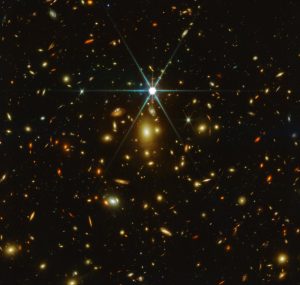 With the ability to peer deeper into the universe—and by doing so deeper back in time—than its predecessors, the James Webb Space Telescope has discovered what may prove to be the oldest known star, and also what might be the most distant known galaxy… or at least, so it seems.

One of the challenges faced by astronomers is that the sheer distance of some celestial objects has caused the light emitted from them to lose energy along their astronomically-long journey, dropping the frequency of the light into the infrared in a phenomenon called “redshift”; an image of a distant galaxy that would have appeared in the visible spectrum can now only be seen in the infrared, meaning a telescope collecting such an image has to be able to see in those deep wavelengths.

Although the Hubble Space Telescope was designed to do just that, its sensors can only see as far as the near-infrared down to wavelengths between 0.8 and 2.4 micrometers (visible light has much shorter wavelengths, occurring between 400 and 700 nanometres), meaning the HST had a limit on how distant an object it was imaging could be. JWST, however, was designed to image objects ranging from visible red light down through the mid-infrared (0.6–28.3 micrometers), allowing it to see much, much further into space, and in turn further back in time, then its iconic predecessor.

Working from an earlier clue provided by the Hubble Space Telescope (HST), the James Webb Space Telescope (JWST) has imaged a star catalogued as WHL0137-LS, although the star’s discoverers have named it “Earendel”, the name of both a Norse mythological character and one from JRR Tolkien’s The Silmarillion, derived from the Old English word for ‘morning star’ or ‘rising light’. Residing at edge of the visible universe and magnified over a thousand times by the gravitational lensing of a galaxy along its line of sight, Earendel is a hot blue star between 50 and 100 times the mass of our Sun that is currently 28 billion light-years from Earth, meaning the light we’re now seeing from this distant star is at least 12.9 billion years old, shining at a point in time only 900 million years after the big bang.

If the math of Earendel’s great distance when compared to its age doesn’t make sense, that’s because in the nearly 13 billion years it took the light to travel to Earth the universe has expanded a great deal; while we can be reasonably sure of a given object’s age just by measuring the apparent distance from the light emitted from where it once was, since everything has been growing apart as the universe expands the actual distance will be much greater.

JWST has also discovered the most distant known galaxy yet imaged… maybe. Nicknamed “Schrodinger’s Galaxy”, CEERS-1749 is possibly even older than Earendel, with preliminary data indicating that the light we’re seeing now was emitted from the distant galaxy a mere 220 million years after the Big Bang, meaning the deeply primordial structure that we’re seeing may only be around 100 million years old at that point.

If CEERS-1749 proves to be a galaxy that formed so early in the universe’s history it may force astrophysicists to rethink the evolution of galactic formation—remember, 100 million years on a geological scale is not very long, and is a mere blip when placed into a cosmological context.

However, the “maybe” part of this discovery is also why the galaxy is nicknamed after Erwin Schrödinger’s infamous “Schrödinger’s cat” thought experiment regarding quantum superposition: the distance of extremely distant objects is determined by measuring the amount of redshift the light being observed has undergone, represented by the object’s “z value”; however, CEERS-1749’s redshift appears to exhibit two z vales, making it seem to be in two positions at the same time: one is a z value of 17, meaning it should be 13.6 billion light-years away, but at the same time researchers are also recording a z value of 5, meaning CEERS-1749’s light could be only 12.5 billion years old. This later figure could be corroborated by other, much closer galaxies that appear to be near Schrodinger’s Galaxy in the images produced by JWST.

Even if CEERS-1749 proves to be much closer to home than its redshift implies, JWST is expected to keep breaking distance and age records for the primordial remote objects that it is able to see.