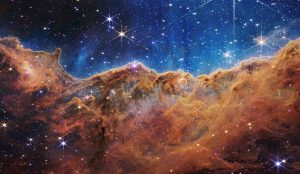 On July 12, NASA released the first full images captured by the James Webb Space Telescope (JWST), offering a deeper, more detailed look at a quintet of celestial phenomena. Aside from being 100 times more sensitive than the Hubble Space Telescope, the JWST is capable of seeing deeper into the infrared than its pioneering predecessor, allowing the distant observatory to not only ignore gas and dust that would otherwise obscure most celestial objects, but also to peer farther into the universe—and in doing so, further back in time—than any telescope has been able to before.

“Today, we present humanity with a groundbreaking new view of the cosmos from the James Webb Space Telescope—a view the world has never seen before,” announced NASA Administrator Bill Nelson. “These images, including the deepest infrared view of our universe that has ever been taken, show us how Webb will help to uncover the answers to questions we don’t even yet know to ask; questions that will help us better understand our universe and humanity’s place within it.”

Five images have so far been released, each offering a new perspective on different types of celestial phenomenon that showcase JWST’s multi-talented toolbox. The individual images can be viewed in the articles linked below:

SMACS 0723: JWST’s first deep-field image is of a cluster of galaxies catalogued as SMACS 0723, 5.14 billion light years distant in the direction of the southern constellation of Volans. This image, released during a presentation at the White House on July 11, is the highest resolution image of the early universe ever taken: to a person standing on Earth’s surface, the area of the sky represented by the image would be the size of a grain of sand held at arm’s length. This image also offers a look at a region of the universe older than anything seen by our civilization: although the cluster is only (only!) a little more than 5 billion light years away, the lensing caused by the cluster’s gravitational force magnifies the even more primal galaxies that can be seen beyond it.

WASP-96b: Much closer to home, JWST has offered a detailed analysis of the atmosphere of a gas giant exoplanet orbiting a star similar to our own Sun, WASP-96b, 1,120 light years away in the constellation Phoenix; the planet is a little less than half of Jupiter’s mass and has a tight orbit that results in an orbital period of only 3.4 days. JWST’s analysis, made by the spacecraft’s Near-Infrared Imager and Slitless Spectrograph (NIRISS), revealed the presence of a hazy atmosphere that contains water vapor, contradicting the previous assumption that WASP-96b’s skies were devoid of clouds.

Southern Ring Nebula: Despite being extensively studied throughout the years, much of the interior of the Southern Ring Planetary Nebula, including the two stars that lie at the center of the luminous cloud, has been obscured by the very dust that comprises the structure. Peering into the near infrared, JWST has peeled back that veil, revealing the planet-sized white dwarf, the remnant of the supernova that formed the nebula, now a force that alters the shape of the gases speeding away from the system’s center, located roughly 2,000 light years from Earth in the constellation Vela.

Stephan’s Quintet: Found in the constellation Pegasus, JWST’s image of this tightly-knit group of galaxies offers researchers new insight into the mechanics of galactic interactions and mergers, and a vastly more detailed view of ancient galaxies. Although they’re 290 million light years distant, only four of the galaxies in the quintet are actually close to one-another, with NGC 7320 only being 40 million light years away. The topmost galaxy in the picture, NGC 7319, has an active galactic nucleus, home to a supermassive black hole 24 million times the mass of the Sun—that’s six times more massive than Sagittarius A*, the SMBH at the center of our own galaxy.

Carina Nebula: And lastly—but certainly not the least of the lot—is the majestic “Cosmic Cliffs” of the Carina Nebula, in a region called NGC 3324. JWST’s image has unveiled previously-obscured stars and stellar nurseries that are forming in the region. These young, hot stars are in the process of carving out a void in the cloud with their stellar winds and intense ultraviolet radiation. This new view of stellar formation will offer new clues as to how these stellar nurseries operate, giving birth to new systems from the remnants of the old.

“We are elated to celebrate this extraordinary day with the world,” exclaimed Greg Robinson, Webb program director at NASA Headquarters. “The beautiful diversity and incredible detail of the Webb telescope’s images and data will have a profound impact on our understanding of the universe and inspire us to dream big.”

Subscribers, to watch the subscriber version of the video, first log in then click on Dreamland Subscriber-Only Video Podcast link.
2022-07-15
Previous Headline News Post: WHO Calls for Investigation Into Lab-leak as Possible Coronavirus Origin
Next Headline News Post: How Crystals and Cosmic Rays Extend the Age of Humanity’s Ancestors by More Than One Million Years