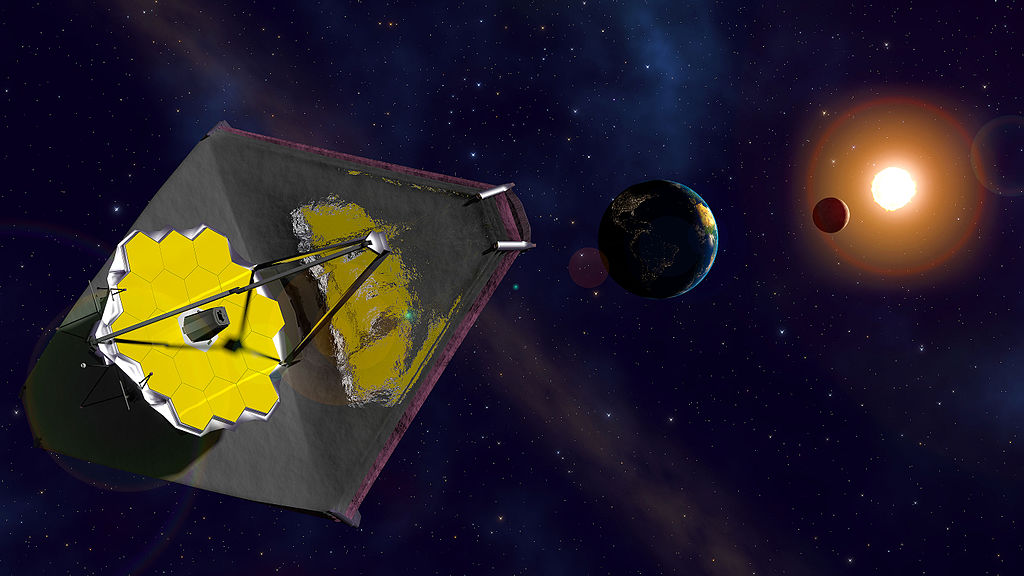 Having completed alignment of its primary mirror array, the James Webb Space Telescope has captured sharp test images that exceeded the expectations of the spacecraft’s designers. Although the initial test image taken was of an extremely faint star that is otherwise unremarkable, that image also revealed the existence of dozens of distant galaxies at the edge of the universe that had never been seen before.

“We said last fall that we would know that the telescope is working properly when we have an image of a star that looks like a star,” says Webb optical telescope element manager Lee Feinberg, at NASA’s Goddard Space Flight Center. “Now you’re seeing that image. And I’m happy to say that the optical performance of the telescope is absolutely phenomenal, it is really working extremely well. The performance is as good if not better than our most optimistic prediction.”

This image is the culmination of the “fine phasing” alignment of the 18 gold-coated beryllium reflectors that collectively form JWST’s  6.5 meter (21 foot) main mirror; this assembly offers more than six times the collecting area over the Hubble Space Telescope’s 2.4 meter (7.83 foot) reflector, and over 100 times the sensitivity provided by the iconic HST. The height of each mirror can also be adjusted to align the phase of the wavelengths of the incoming light, to further sharpen the faint image of the telescope’s distant target.

Each of the segments gathers light from the target object to form an individual image, which is then bounced from the secondary mirror at the end of the ‘scope’s three boom arms to the sensors at the base of the spacecraft; the 18 images are then combined to form a single, sharply-focused image that can then be transmitted to astronomers on Earth.

The star initially used to focus JWST’s complex assembly of mirrors and sensors was a faint Sun-like star 260 light-years away in Ursa Major called HD 84406, chosen for the relatively empty sky in that star’s background; however, the final test-focus image was made on an unremarkable star roughly 2,000 light-years away with the catalogue entry of 2MASS J17554042+6551277. Although this star is 100 times fainter than what can be seen with the human eye, JWST’s instruments were able to provide a sharp image of the obscure object.

“You not only see the star and the spikes from the diffraction of the star, but you see other stars in the field that are tightly focused, just like we expect, and all sorts of other interesting structure in the background,” explains Feinberg.

The “interesting structure” seen in the image’s background appears to be dozens of otherwise undiscovered galaxies, far too distant to be seen by any of JWST’s predecessors. Only one of the distant points of light could be identified by astrophysicist Dr. Grant Tremblay, with Harvard & Smithsonian’s Center for Astrophysics.

“Can ID only one galaxy at z=0.285, the rest don’t have spectroscopic redshifts,” Tremblay posted in a March 16 tweet. Right out of the gate, the James Webb Space Telescope has made numerous discoveries simply as a side-effect of testing the telescope’s focus. Although JWST’s optics are now properly aligned, the spacecraft is still cooling down in the shade of its own sunshield, with its onboard instruments expected to be fully cooled and ready to begin observing the depths of the universe in earnest this summer.