Intelligence in Octopuses Linked to a Genetic Trait Found in People 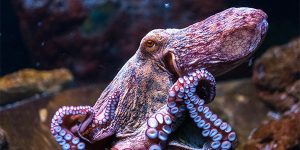 In yet another case of convergent evolution, octopuses appear to have developed a type of genetic structure that is associated with complex brains, a trait shared by vertebrates such as humans, a potential key to understanding how two species that are so vastly different could develop remarkably similar intelligences.

The shared genetic trait, discovered by researchers with Germany’s Max Delbruck Centre, is a high number of RNA strands called microRNA (miRNA) that is typically only seen in vertebrate species; miRNA are small, non-coding RNA strands that are responsible for regulating gene expression, or what information in a creature’s genetic code is actually used. The researchers found that the common octopus (Octopus vulgaris) has 162 of these miRNA genes grouped into 138 miRNA families, with at least 94 of these being found only in O. vulgaris.

To put this in perspective, other mollusks such as oysters—a species far more closely related to octopuses than humans—typically sport only a handful of microRNA groups that are associated with complex brains—and oysters aren’t particularly well known for their expansive intelligence.

Although the number of miRNA families found in a given species shouldn’t be considered to be a true measure of that organism’s intelligence, the known miRNA count for an octopus puts the species somewhat ahead of what is found in chickens; although this mightn’t sound like much, this still places the average octopus—and by extension other cephalopods like squids and cuttlefish—far ahead of other invertebrate species, most of which appear to have never evolved much of an intelligence at all.

“To give you an idea of the scale, oysters, which are also mollusks, have acquired just five new microRNA families since the last ancestors they shared with octopuses—while the octopuses have acquired 90,” explains lead study author Dr. Grygoriy Zolotarov, a biologist with the Max Delbruck Centre. These miRNA groups were found to be most prevalent in the brains of octopus hatchlings, suggesting that these RNA regulators play a role in the development of neurology capable of complex cognitive abilities.

In terms of both genetics and taxonomy, humans and octopuses are about as far apart as two species can get, with our last common ancestor assumed to be a strange, ten-tentacled flatworm that burrowed into the seafloor between 750 and 500 million years ago, a time before the division between vertebrates and invertebrates even occurred.

“If you want to find out about the intelligence, or the brains, of an alien, a good model for that is studying the octopus,” remarks study senior author and systems biologist Nikolaus Rajewsky. “The evolution of its complex brain, and the cognitive features that come with it, happened completely independently from us. So by comparing it to us, you can learn about general features shared between us, but you can maybe also find stuff that the octopus has that we don’t.”

Yet despite being so distantly divergent in both genetics and physiology, octopuses have a number of traits that are remarkably similar to ones found in humans, such as excellent memories, an innate curiosity regarding their environment and tool use, such as carrying coconut shells with them to use for protection when needed; when writing about octopuses in his third century AD work On the Characteristics of Animals Roman naturalist Claudius Aelianus remarked that “mischief and craft are plainly seen to be characteristics of this creature.” Despite both of our species having descended from an organism that only had rudimentary light-sensing organs, octopus and human eyes have evolved to be remarkably similar in structure; and there is speculation that octopuses dream, due to changes in skin color that they exhibit while sleeping.

The researchers point out that a direct link between miRNA and advanced intelligence has yet to be proven, but an association between the two phenomena has been observed, meaning that the study of miRNA might prove to be a useful tool to further our understanding of the development of complex intelligence.

“They say if you want to meet an alien, go diving and make friends with an octopus,” Rajewsky advises.