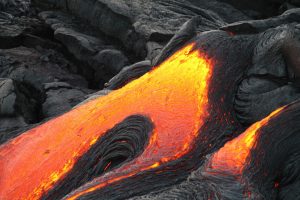 After decades of slumber, the world’s largest active volcano has awakened, with a new eruption starting at the summit of Hawaii’s Mauna Loa late last month; and although there is no danger of an imminent eruption from the caldera at Yellowstone, it has been discovered that there is more magma residing beneath the long-dormant supervolcano than researchers previously assumed.

One of the five volcanoes that form the Island of Hawai’i, Mauna Loa is the largest active above-water volcano on Earth, dwarfed only by the Tamu Massif seamount in the Pacific Ocean off of the coast of Japan. Although Mauna Loa is considered to be an active volcano, the mountain hasn’t erupted since 1984, an event that produced a lava flow that came to within four miles of Hilo, the island’s largest city; the time since that eruption marked the longest period of quiet for Mauna Loa’s recorded history, with liquid lava accumulating beneath the mountain in the 38 years since.

This new eruption began in Moku‘āweoweo (Mauna Loa’s caldera, one of the mythical homes of the Hawaiian goddess of volcanoes and fire, Pele) at 11:30 pm on November 27, with the eruption spreading to the mountain’s Northeast Rift Zone by 6:30 the next morning. Initially, three fissures opened in the Rift Zone, although two of those became inactive by early afternoon. Lava flows from the third fissure cut off the road leading to the Mauna Loa Observatory by early evening the same day, at about the same time a fourth fissure made itself known.

Although U.S. Geological Survey (USGS) has warned nearby residents to review their eruption preparation plans, the eruption appears to present no apparent threat to local communities, with the eruption not expected to expand past the Northeast Rift Zone; in fact, local officials are looking to capitalize on the event, hoping to draw more tourists to the region to view the spectacular show being provided by the eruption.

Meanwhile, in Wyoming, a new survey of the geology beneath the Yellowstone supervolcano has found that the chambers that reside beneath the massive caldera hold much more magma than previously anticipated.

The study, conducted to determine the ratio of crystalline rock to magma, a metric used to determine the likelihood of a future eruption, found that the volume of the chamber immediately beneath Yellowstone’s caldera is roughly 1,600 cubic kilometers (384 cubic miles), twice as large as previously thought.

The researchers also discovered that the amount of melted rock that makes up the material in the upper chamber, a reservoir that rises to somewhere between three and eight kilometers (1.9 and 5 miles) below the surface of the caldera, is somewhere between 16 and 20 percent, much higher than the 5 to 15 percent previous surveys had discovered; the researchers point out that this is nowhere near the threshold of 35 to 50 percent that could herald an eruption, an event that the Yellowstone supervolcano hasn’t produced in 640,000 years.

This discrepancy doesn’t mean that the supervolcano’s chambers have been filling with magma at an alarming rate, but rather that the techniques for determining what’s happening deep underground have been improving over the years. “It’s a bit like getting a new lens on an old camera,” explains Michael Poland, a research geophysicist with the USGS’s Yellowstone Volcano Observatory, who was not involved in the study. “It’s the same camera, but you’ve got finer resolution now. You see with more clarity.”

Subscribers, to watch the subscriber version of the video, first log in then click on Dreamland Subscriber-Only Video Podcast link.
2022-12-06
Previous Headline News Post: Intelligence in Octopuses Linked to a Genetic Trait Found in People
Next Headline News Post: Signs That Black Holes Might Be Wormholes May Have Already Been Detected