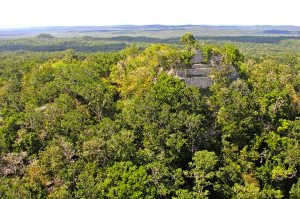 A teenager that pinpointed the possible location of a lost Maya city using maps of the stars has recently returned from an expedition deep into the Mexican jungle to confirm whether or not the Maya had built anything of significance in the area. Although the expedition was only a partial success, the team found the lost ruins of a small community, including the pyramid that would have been central to its inhabitants’ daily lives.

As a young boy, William Gadoury became fascinated with Maya culture after visiting the ruins at Chichen Itza during a trip to Mexico with his grandfather. Gadoury subsequently became obsessed with the Maya civilization, and extensively studied what is known about them. During his research William also found that the Maya were skilled astronomers, an interest he shared with the long-lost culture.

One day, Gadoury noticed that the placement of many of the Maya’s cities didn’t make sense, in that they were arranged in places that lacked some fundamental resources, such as water: “[The Maya] put some cities really far from water or in the mountains; I asked myself, why [did] they do things like this?”

William hit on the idea that the distribution of Maya cities may have been based on stellar constellations, rather than the practicality of available resources; for about a year, he researched the idea, matching charts of constellations as they were known to Maya astronomers against known Maya settlements and cities. His efforts revealed that the sites on the ground matched the positions of 117 stars, grouped into 22 constellations. But there was one blank spot amongst a triad of stars that correspond to the constellation of Orion: the site that should correspond to the lower left corner of Orion’s skirt, the star Saiph (Kappa Orionis) held no known ruins.

The ruins of two major cities with massive pyramids, Calakmul and El-Mirador, already matched the positions of Alnitak (Zeta Orionis, the left-most star in Orion’s belt) and Rigel (Beta Orionis, the bottom-right corner of the skirt), respectively. The exclusion of a site corresponding to Saiph would be peculiar, as these three stars are central to the Maya creation myth, with each of the stars being a stone cast in a triangle by a god as the hearth of creation.

Publicly available satellite maps of the area didn’t have the resolution necessary to see if any potential ruins left their mark on the landscape, but a chance encounter with Canadian Space Agency (CSA) RCM Mission Manager Daniel DeLisle, who, being impressed with Gadoury’s theory, arranged for the RADARSAT-2 satellite to take high-resolution images of the region. These images revealed three sites that, at least from space, showed patterns in the forest that could have been artificially produced.

The only thing left was to visit the sites themselves, dubbed Kʼàakʼ Chiʼ (“Mouth of Fire”) by William when he was 15, to confirm whether or not the Maya had built anything there. An expedition led by Francisco Estrada-Belli, a Research Professor with the Middle American Research Institute, Tulane University, was launched, with Gadoury, now 19 years old, accompanying them as team member.

The team used rugged roads cut by illegal logging operations to get their convoy as close as possible to Gadoury’s coordinates, and then hiked the final few kilometers to investigate each of the sites in person. A chultun, a carved subterranean chamber used to hold provisions such as food or water, was found at the first site, although considering the extent of the Maya across Mexico at the height of their civilization, this could simply have been part of a small village or homestead.

Although the second site yielded no apparent man-made artifacts or works, the third site was home to more promising evidence: a long-looted tomb, signs of a stone platform and a buried pyramid that was directly on the spot Gadoury had pinpointed for their GPS coordinates were found.

However, the pyramid is estimated to be only 4 meters (13 feet) in height, a structure that would be part of a smaller community of only a few hundred people. Although Gadoury’s discovery was a success—especially considering he found it on his first expedition—it wasn’t the ruins of a major city as he had hoped, other known sites include Calakmul and El-Mirador. Nonetheless, communities such as this were vital to the Maya people

Although the expedition was only a partial success, William remains undeterred, and says that he is proud to have achieved a goal he set for himself years ago.

William Gadoury’s discovery is featured in a documentary titled The Teenager and Lost Maya City, produced by the CBC’s The Nature of Things, and can be viewed on CBC Gem.

Subscribers, to watch the subscriber version of the video, first log in then click on Dreamland Subscriber-Only Video Podcast link.
2022-05-23
Previous Headline News Post: Gimbal UFO Object Exhibits ‘Breakthrough Technologies’, According to Independent Analysis
Next Headline News Post: The Worldwide COVID-19 Death Toll is Nearly Three Times Higher than the Official Count, According to the WHO