The Worldwide COVID-19 Death Toll is Nearly Three Times Higher than the Official Count, According to the WHO 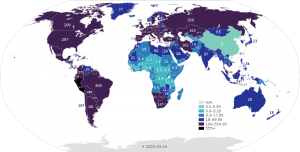 The official COVID-19 fatality count over that two-year span was just over 5.4 million (as of this writing, that number stands at just under 6.3 million), however this number was always assumed to be an undercount, considering many countries around the world lack the resources for adequate reporting, leaving many cases either delayed in being counted, or sometimes not reported at all; the WHO reports that even before the pandemic, roughly six out of every 10 deaths would go unreported.

The official count also fails to include deaths that were indirectly caused by COVID-19, such as cases of suicide triggered by the economic, psychological and emotional effects of various health measures taken around the world, and patients that died from otherwise treatable conditions who could not gain access to health care facilities that were overrun by COVID-19 cases. The study does take into account deaths that may have been averted over the course of the pandemic, for instance a certain portion of the population that would have otherwise been killed in traffic accidents that didn’t occur due to travel restrictions.

Needless to say, the WHO’s report is not without controversy: the report says that nearly half of the unreported deaths, approximately 4.7 million, occurred in India. The Indian government disputes this number, putting their own estimate at about 480,000. The WHO is reviewing new figures provided by the Indian government, and may either revise their original estimate, or include a disclaimer regarding the disputed figures.

A major example of unreported COVID-19 cases and deaths come from North Korea: after over two years in isolation, the hermit nation reported that the country was under a state of “severe national emergency”, and as of May 8 they had recorded over 350,000 cases of a severe fever with symptoms consistent with COVID-19; by May 17 this number rose to 1.48 million, nearly 5.8 percent of North Korea’s population of 25.5 million people. Severely inadequate testing has left only 168 cases of this fever as confirmed to be COVID-19, and although the death toll will be much higher, only 65 deaths have been confirmed to have been caused by the disease.

The North Korean government closed its borders early in the pandemic, exacerbating the problems suffered by the country’s already inadequate health care system, with many citizens now relying on traditional medicine to treat the disease, using ingredients such as ginger or honeysuckle tea and a willow-leaf drink. It is believed that virtually none of North Korea’s population is vaccinated against the disease, as offers for the delivery of millions of doses of COVID-19 vaccines from China and the international COVAX system were rejected, due to the prospect that outside authorities would monitor the distribution of the doses.