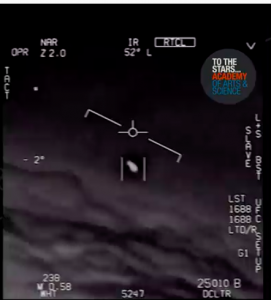 The object seen in the ‘Gimbal’ video that was released as part of a trio of UAP recordings in 2017 exhibited breakthrough technologies, according to three independent analyses conducted by civilian investigators. All three investigations found that the object came to a standstill despite facing heavy winds and reversed direction while gaining altitude—all without exhibiting any sign of having any means of conventional propulsion.

These three independent analyses were made using computer simulations that reconstructed the Gimbal object’s flight path using the aircraft’s flight data and camera orientation as provided on the FLIR readout included in the video, and the apparent movement of the clouds visible at a lower altitude in the background. The reconstructions were made by two self-described UFO “agnostics”, YouTubers Yannick P and Edward Current, and UFO debunker Mick West; despite all three reconstructions having been made independently, they each came to nigh-identical conclusions regarding the object’s flight path.

Each of the analyses shows that the object, part of a “fleet” of five UAPs moving at about 100 nautical miles per hour, or “knots” (115.08 mph or 185.2 km/h), against a 120-knot (138.10 mph or 222.24 km/h) headwind (according to the live commentary of the aircrew witnessing the event), slowly gains altitude over the course of the video before coming to a complete stop in relation to the ground (while still gaining altitude), and then reversing direction completely, in a motion that is best described as a vertical u-turn.

According to one of the witnesses to the Gimbal encounter, former Navy F/A-18F fighter pilot Ryan Graves, the path of the object in the simulations “appeared the same, in my mind, as what I saw on the situational awareness page [an overhead radar display].” The event, just one in a series of anomalous encounters that took place off of the East Coast over the course of 2014 and 2015, took place in January 2015 at an altitude of roughly 20,000 feet, involved multiple sensor systems (such as radar and FLIR targeting pods) and was witnessed by numerous aviators.

At lower altitudes, a speed of 100 knots is more than sufficient for the wings of a conventional aircraft can keep the craft in the air; however, at higher altitudes, such as the 20,000 feet that the Gimbal object was operating at, the air becomes substantially thinner, requiring high-flying aircraft to move at higher speeds for their wings to maintain lift. In an interview with former State Department analyst Marik von Rennenkampff for The Hill, Graves pointed out that if the Gimbal object was a conventional aircraft, it would be “at the cusp of an aerodynamic stall (when an aircraft’s wings no longer generate sufficient lift to fly, let alone maneuver).”

Adding to that aerodynamic conundrum, former director of Advanced Systems at Lockheed’s Skunk Works division and aerospace engineer Steve Justice noted that at that altitude, “you want to be up at several hundred miles per hour because the air density is starting to go down, the wings aren’t working so well.” He added that “for the airplanes I would design, to do 100 knots at that altitude [would] require pretty big wings,” appendages that are clearly not visible on the object in the video.

“I just don’t know of anything that… rotate[s] 90 degrees to flight and decelerate[s] almost to a stop.”

These factors have prompted von Rennenkampff to question why many individuals in the US government are still hesitant to acknowledge the apparent capabilities these objects exhibit, capabilities that, despite lacking any visible aerodynamic components or even propulsion systems, outstrip any aviation technologies available to us.

In his op-ed for The Hill, von Rennenkampff writes that, in addition to the civilian analyses, “if so many former officials can state that UFOs demonstrate extraordinary capabilities while, at the same time, members of the public can independently verify these statements, why has the government not admitted as much?”

Von Rennenkampff has compiled videos of the simulations, including an analysis of the claim that the object seen in the video is just the flare from a distant aircraft’s exhaust, into a video posted on his YouTube channel. Mick West has also posted an interactive version of his simulation online.