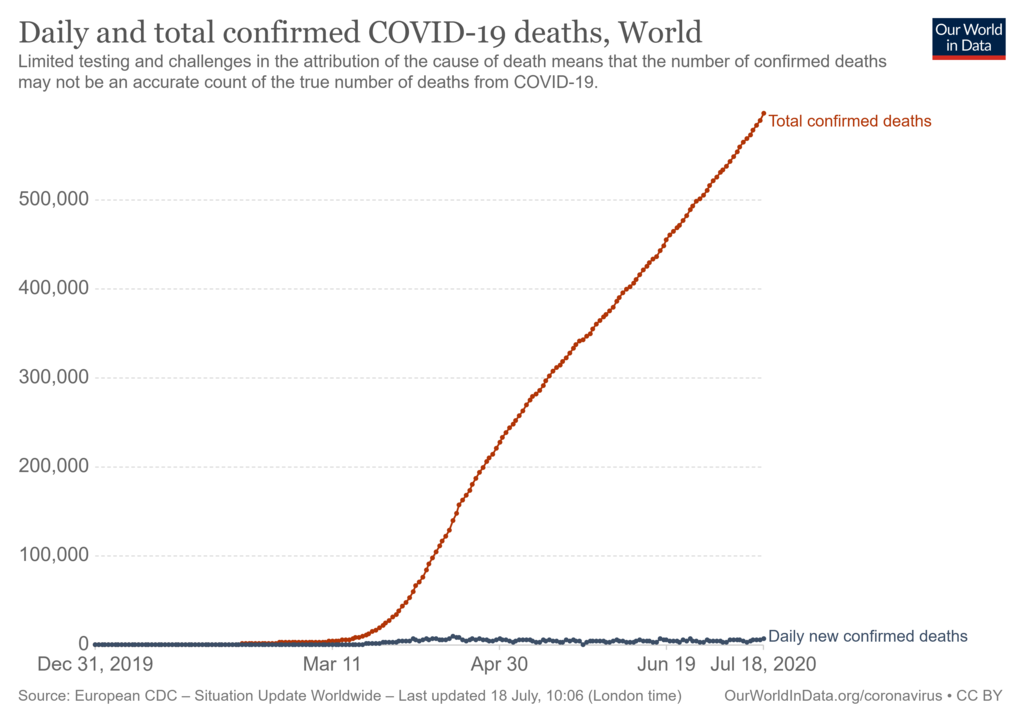 On September 22, 2020, the United States marked a grim milestone in the ongoing COVID-19 pandemic, with the coronavirus having killed its 200,000th victim.

The number of American casualties currently stands at 203,800, the highest of any single nation in the world, with the U.S. suffering over one-fifth of the world’s nearly 1 million (990,000) fatalities. This sadly fulfills a prediction made by Dr. Anthony Fauci, the Director of the National Institute of Allergy and Infectious Diseases, in March: “looking at what we are seeing now, I would say between 100,000-200,000 deaths from coronavirus.”

To date, the U.S. has recorded over 7 million confirmed cases of COVID-19, with more than 400,000 having been hospitalized for the illness since early March. The most populous states are, unsurprisingly, the hardest hit, starting with New York at the outset of the pandemic, with NYC still under quarantine restrictions more than six months later. California surpassed New York as the worst-hit state in July, with over 800,000 infections recorded to date. Cases have been surging in North Dakota in recent weeks, and currently ranks first in the country for the number of cases per capita, with coronavirus infections continuing to rise in Utah, Texas and South Dakota.

To put this ongoing disaster into perspective, the number of victims of natural disasters cannot compare to a catastrophe of this magnitude–the Galveston Hurricane of 1900, considered the most deadly natural disaster in the U.S., killed an estimated 12,000 people, a full order of magnitude less than COVID-19’s death toll. The number of coronavirus victims in the U.S. exceeds the number of Americans killed in the past five major wars—Korea, Vietnam, Persian Gulf, Iraq and Afghanistan–combined. It far exceeds the 116,000 killed in the industrialized meat grinder of World War I, and is roughly equal to the 204,000 combat deaths suffered in the American Civil War. The coronavirus death toll would be equal to the September 11 attacks if the attacks were made every day for 69 consecutive days.

While other countries around the world are bracing against the beginnings of a second wave of infections, the U.S. is still grappling with what is considered to be its first wave, with many more infections, hospitalizations and deaths expected before the pandemic is beaten, with researchers at the University of Washington’s Institute for Health Metrics and Evaluation (IHME) forecasting an additional 180,000 deaths by the end of the year. But that number can be cut by nearly two thirds, with their study saying that “increasing mask use to 95% can save nearly 115,000 lives, reducing that expected number of deaths by 62.7%.”

Experts still advise that the public practice physical distancing, mask wearing and hand washing to help stem the spread of the virus, and to prevent a potential “twin-demic” of a flu-and-coronavirus combination that could overwhelm the health care system.

“We have to stay strong and do the things that could decrease the spread,” according to White House coronavirus task force testing czar Dr. Brett Giroir.

“Number 1: Wearing a mask when we can’t physically distance. Number 2: Avoiding crowds. Number 3: Hygiene. And with smart testing, we can flatten the curve and slow the spread,” according to Giroir.

“We do have a formula to reduce the deaths, reduce the cases. But we all have to be disciplined and diligent to make sure we obey that every single day.”

Subscribers, to watch the subscriber version of the video, first log in then click on Dreamland Subscriber-Only Video Podcast link.
2020-09-26
Previous Headline News Post: It’s All Greek To Me: NHC Runs Out of Names for Atlantic Storms, With More on the Way
Next Headline News Post: Scientists Developing a Vaccine that Spreads Like a Virus. What Could Go Wrong?