As The Thwaites Glacier Melts, Scientists Hypothesize the Weight of its “Doomsday” Effect 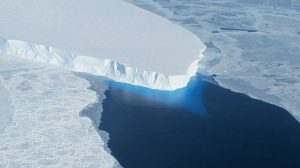 A new study of Antarctica’s Thwaites Glacier has revealed that it appears to be melting even faster than previous estimates indicated, with the face of the ice sheet now retreating at a rate twice as fast as previously recorded.

Nicknamed the “Doomsday Glacier” by the researchers that study it, the Thwaites Glacier is a 2-kilometer (1.2-mile) deep river of ice the size of Florida that pours somewhere between 50 to 85 billion tons of ice into the Amundsen Sea each year, accounting for 4 percent of annual sea level rise. Although these tens of gigatons of annual ice shed sounds like a massive amount (and indeed it is) this would pale in comparison to what would be released into the ocean if the entire glacier were to catastrophically give way, an event that would raise sea levels by more than two feet (65 centimeters)–hence the “Doomsday” part of its less-common moniker.

However, the rapid meld of this influential ice flow may have accelerated in recent years: a recent high-resolution survey of the ice has discovered that the face of the glacier is now retreating at a rate of 2.1 kilometers (1.3 miles) per year, a rate double that of previous estimates. This melt is being exacerbated by the detachment of Thwaites’ ice shelf from the seafloor, allowing the warming waters of the Southern Ocean to erode the portion of the glacier that extends out into the sea from underneath.

The potential collapse of the Thwaites Glacier is of additional concern due to the potential domino effect such a collapse could have on its neighboring glaciers, with the stability of other ice flows depending heavily on the position of the mass of Thwaites’ ice.

“You can’t take away Thwaites and leave the rest of Antarctica intact,” remarks study co-author Alastair Graham, a marine geologist at the University of South Florida. Graham describes the potential loss of Thwaites as “existential.”

“Thwaites is really holding on today by its fingernails, and we should expect to see big changes over small time scales in the future—even from one year to the next—once the glacier retreats beyond a shallow ridge in its bed,” according to study co-author Robert Larter, of the British Antarctic Survey.

Graham indicated that his team could not confidently forecast when the glacier might collapse, but he warned that what we do in the next 75 years will be crucial for maintaining this frozen leviathan’s stability.

“Right now, we can do something about it—especially if we can stop the ocean from warming,” Graham warns.