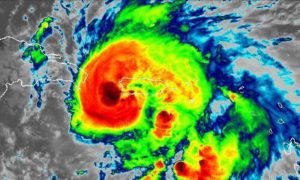 Three massive storms have caused widespread damage around the world over the past week, with two typhoons causing havoc in Alaska and Japan, while Hurricane Fiona has caused massive damage in Puerto Rico and neighboring islands such as the Dominican Republic and Guadeloupe. Each storm featured unusual characteristics such as rapid intensification that point to their being influenced by global warming.

Hurricane Fiona is only the third hurricane and first major hurricane of what is proving to be an unusually slow season in the North Atlantic, with only six named storms identified this year so far. Fiona made landfall on the southwestern coast of Puerto Rico on September 16, causing a massive power outage across the entirety of the island, its power grid still under repair after suffering damage caused by 2017’s Hurricane Maria. 113 mph (165 km/h) wind gusts and 31.34 inches (796 mm) of rain caused extensive infrastructure damage to roads, houses and bridges, and roughly a third of Puerto Rico’s population are without drinking water.

In the western Pacific Typhoon Nanmadol underwent rapid intensification after its designation as a typhoon on September 12, quickly reaching Category-3 status; by September 16 the storm had intensified further into a Category-4 “super typhoon”, with a system pressure of 910 hPa, the lowest recorded this season. Nanmadol made landfall on Japan’s Kyushu Islands, prompting authorities to issue an evacuation alert to over four million residents. The storm lost strength and was downgraded to a tropical storm as it tracked northeast along the island nation’s northwest coast, releasing exceptionally high volumes of precipitation along its path.

And Alaska suffered record flooding as a result of the remnants of Typhoon Merbok, the most intense storm ever recorded in the Bering Sea for the month of September, with hurricane-force winds pushing a storm surge that inundated the coastline. Typically, such storm surges are mitigated by the presence of coastal ice, of which is usually reaching its lowest extent this time of year, but with the early arrival of this storm there was nothing in the way to absorb the water’s energy.

Pictures on social media showed entire communities having been flooded, including a house washed away in Nome that had become lodged under a bridge. Governor Mike Dunleavy declared a state of disaster on September 17 and indicated that he was preparing to file for federal disaster assistance two days later; Alaska’s Division of Homeland Security and Emergency Management (DHSEM) has stated that the true extent of the damage to infrastructure and property isn’t likely to be known for a number of days.

As with Typhoon Nanmadol, Merbok experienced rapid intensification over the course of its evolution in the central Pacific, a hallmark of an ocean surface warmed by climate change. The storm also formed unusually far to the east over equally-unusually warm waters; climate researchers consulted by Axios indicated that out-of-season storms such as these are likely to become more frequent as global warming progresses.

“This is surely a climate change connection,” according to University of Alaska at Fairbanks climate scientist Rick Thoman.

Subscribers, to watch the subscriber version of the video, first log in then click on Dreamland Subscriber-Only Video Podcast link.
2022-09-20
Previous Headline News Post: As The Thwaites Glacier Melts, Scientists Hypothesize the Weight of its “Doomsday” Effect
Next Headline News Post: It’s Official: No More UAP Videos Will Be Released by the US Navy