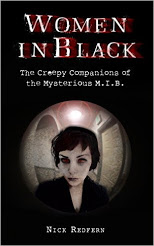 Listen in the car, listen on the beach, listen at home…but maybe not at night.

We all know what Men in Black are, but Nick has discovered that there is an equally weird phenomenon involving women. Or no, maybe it’s actually a little more weird. With Whitley Strieber at the helm and Nick delivering the information, you can be certain of a great show and an exciting story!

Have a wonderful Labor Day, and by the way, for our free listeners, this week you get to listen to the whole show without ads—except maybe Whitley whispering in your ear from time to time about joining this wonderful, vital community.

Nick’s one of our most popular guests. Subscribers can explore his many appearances on Dreamland by clicking here.

And hey, grab a copy of Women in Black. It’s a chilling, fascinating read.

Subscribers, to watch the subscriber version of the video, first log in then click on Dreamland Subscriber-Only Video Podcast link.
2016-08-31
Previous Dreamland Podcast Post: A Crop Circle Expert Gets Banned by Facebook and a FULL REPORT from Linda Moulton Howe on that Ultra High Strangeness Ansty Crop Formation
Next Dreamland Podcast Post: Eyewitness to Antarctic Mysteries and Much More–This Dreamland will be an All-Time Classic!