Edgar Cayce: the Story BEHIND the Story

Home  »  Dreamland Podcast   »   Edgar Cayce: the Story BEHIND the Story 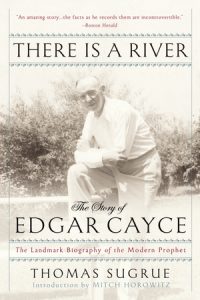 Edgar Cayce was the first person ever to describe himself as a ‘channel,’ and he was one of the greatest channels of all time. His medical readings are legendary, his prophecies amazing.

But who was he, really, and how did he come by his knowledge? We talk to Mitch Horowitz, who wears a hat—among many others—as an expert on Cayce.

Editor in Chief of Tarcher/Penguin, Mitch has just republished the classic biography of Cayce: There is a River, the Story of Edgar Cayce by Thomas Sugrue.

How did Cayce’s medical readings work? Were they effective? Can they still be used today? And what about channeling? He coined the word to describe himself, and claimed to be accessing what he called the Akashic Record. But what is it, really? What was Cayce DOING??

Find out from Mitch in this terrific interview. Get There is a River at your local bookstore, from Amazon or Barnes and Noble, and wherever ebooks are sold.

Subscribers: Be sure you are logged in before listening. Then you will hear the full hour of Dreamland commercial free without needing to move to the special interview.

In the second half, for Unknowncountry.com subscribers, we discuss Cayce’s prophecies, both those that were startlingly accurate and those that weren’t. We get into an important prophecy about our shifting poles that has been long believed to be among the inaccurate ones, but is coming true right now! Do not miss this important and revelatory discussion.

Also, did you know that Ronald Reagan had extensive occult knowledge? Well, Mitch is an expert in that, too, and here he tells us the remarkable story of just what the president actually knew about this hidden world.

PLUS an added bonus: Mitch, as editor of Whitley Strieber and Jeff Kripal’s new book Super Natural: a New Vision of the Unexplained, tells why he feels it is so important. (Publication date: February 2016)

Mitch’s website is MitchHorowitz.com.
You can watch his fascinating short videos on various superstitions at OriginsTheSeries.com.