A Historic Moment: Scientific Proof that UFOs are Unknowns Revealed in a New Documentary 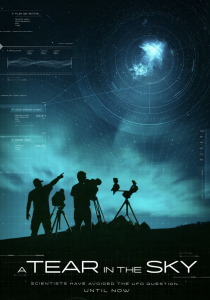 Caroline Corey is a talented and respected director and producer, known for her 2019 documentary, Superhuman: The Invisible Made Visible, which she discussed on Dreamland on July 24 2020. She joins Whitley again to talk about her new and award-winning film, A Tear in the Sky, which follows a team of scientists and investigators with almost $650,000 worth of equipment in an effort to capture real-time footage of UFOs and UAPs from three separate locations.

In an interview so incredible it leaves Whitley momentarily LOST FOR WORDS, he and Caroline discuss her films, underwater ‘alien’ bases, human consciousness, psychic powers, and a possible communication with whatever it is that is behind this strange phenomenon.

Now that this documentary has been made, there will be a paper or papers written by some of the scientists involved, to be published in the peer-reviewed press. This is a step beyond the official revelations that have been made because it will provide scientists with data involving things like the heat signature of the objects recorded, their speed, size, altitude and many other data points. This means that other members of the community can use the same methodologies to see if they can replicate the results. If so, then UFOs will become a legitimate area of scientific study for the first time, offering granting entities a clear avenue to make project funding decisions, which has not existed before.

The documentary also marks a step towards a future where close encounters are taken seriously, and where witnesses are no longer dismissed. The reason is simple: if we can prove that these objects are here, then there is a basis for serious study of the claims of contact.

Subscribers, to watch the subscriber version of the video, first log in then click on Dreamland Subscriber-Only Video Podcast link.
2022-05-13
Previous Dreamland Podcast Post: Jeffrey Mishlove Won Half a Million Dollars for His Extraordinary Essay on the Afterlife. This is Why.
Next Dreamland Podcast Post: Whitley on the Congressional Hearings and Series of Shocking Personal Experiences He’s Just Had