A Close Encounter Witness with Extensive Evidence to Support His Claims 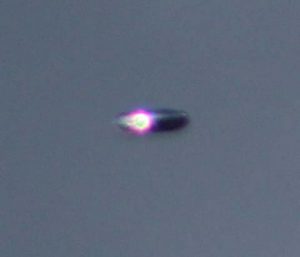 One of the very rarest things that we see in the close encounter experience is a witness who actually has verifiable evidence of his claims. Such a witness is Paul Sinclair, this week visiting Dreamland for the first time, and talking not only about his own experiences, but about the extensive research he has done into some very eerie and disturbing events in the region of England where he lives. This is unique, absolutely fresh and new programming. You will never have heard anything like it before. And when, in the second half of the show, he gets into what his research has uncovered, fasten your seatbelts and prepare for one very, very memorable journey into some deeply hidden information.

The photo below is one he took of a UFO. We have analyzed it and can find no evidence that it’s a computer graphic or anything except what it appears to be, a genuine unknown–although that, of course, does not answer the question any more completely.