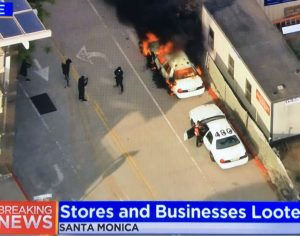 As hard as it has been to do, I have now watched the video of the murder of George Floyd carefully a number of times. I have watched the movements, or lack thereof, of everybody visible. The facts are well known. Mr. Floyd was handcuffed, thrown to the ground, and murdered by the action of having his throat crushed under the heel of a police officer.

As he spent over eight minutes killing Mr. Floyd, the officer stood with one hand in his pocket. He made no effort to move, to desist, or to determine what was happening to the man under his heel. The scene was quietly watched by other officers, and carefully videotaped. This all makes the murder look like it was intentionally staged to be seen. Of course it wasn’t, since a bystander made the video, but it has revealed the horror of what was being done–one police officer carefully murdering a man while three others look on.

No matter why Mr. Floyd was arrested, he was absolutely helpless and not offering any resistance when he was methodically and carefully murdered.

Afterward, while the officers were fired immediately, and justifiably so, there was a necessary delay while the District Attorney’s Office built its case. People do not understand why such a delay would happen, but it is inevitable in cases of police involvement, which the murderer would have known.

Then there was the initial choice of Murder 3 instead of Murder 1, made, almost certainly, because the DA wants to be certain of a conviction. As well, the other officers present, all likely guilty of crimes as well, have not yet been charged because building a case against them is going to be difficult because of the procedures that are mandated to prevent a rush to judgement against police officers who have been involved in deadly force incidents.

All of this adds up to a situation tailor made to incite riot, which is exactly what has happened. (To read more about the reason for the care and the delays in charging Derek Chauvin, click here.) And to make matters worse, Donald Trump added fuel to the fire by tweeting “when the looting starts, the shooting starts.” The incendiary tweet quoted a threat made by the Miami police chief during the 1967 civil rights riots. It may have been intended to warn the rioters, but it the effect of inciting even more anger.

Now, I want to talk about what, exactly, Derek Chauvin and possibly the officers around him, thought they were doing. Chauvin appeared to be intentionally taking the life of George Floyd. It was being done in a video so carefully made that it reveals the horrible deliberation and passive compliance by the other police on the scene that was involved.

Why would anybody do that? There can be only one logical reason, which is to incite riot. But I think that it has become clear that the officers simply did not realize that they were being recorded.

So here we are, with a man horribly murdered, the reputation of a police department in the mud and police everywhere being held in ever more violent contempt, and more of a racial divide in the United States than we have had in a generation.

AND we have COVID-19 lurking in the background.

Every single one of us must go deep into our hearts and find what is best there, and bring it forth in defense of our republic and the future of our children. We do that by not joining the fury in the streets, and not allowing ourselves to fall into the trap of a personal response founded in racism, either angry or fearful.

As the great Roman orator Cicero said when he was engaged in one of his many battles to save their republic, “O tempora, O mores!”

Oh times, oh morals. Two thousand years have passed, and it has never been said better.