Melvin Morse: Closer To The Light

Home  »  The Mystical Underground   »   Melvin Morse: Closer To The Light 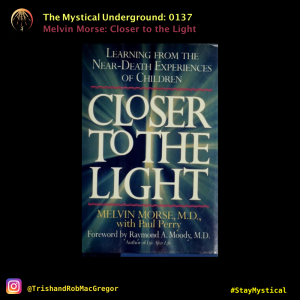 Join Trish and Rob for a conversation with…

Melvin Morse is a former Critical Care Physician who studied the near-death experiences of children at Seattle Children’s Hospital. He has published several books and scientific papers on near-death experiences, spiritual healing, remote viewing, and the entire range of spiritual visions surrounding the dying process. He was described by NBC News as doing more than any other scientist to prove the existence of life after death.

His international best seller Closer to the Light describes the near-death experiences of children. His second book Transformed by the Light, documented the long-term positive transformations of children who had NDEs. His third book Parting Visions detailed the shared dying experiences of children and adults. His latest book Where God Lives discusses spiritual neuroscience and how our brains are connected to the Universe. His books were co-authored with science writer and documentary filmmaker Paul Perry.