OUT THERE: Clear Photos of a Daylight Disk over Town in Mexico 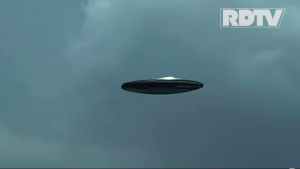 On August 17 Valle Hermoso resident Juan Manuel Sanchez managed to take a sequence of pictures of a silvery daylight disk that he said was hovering across the street from his property. The disk appeared briefly in front of looming storm clouds and the witness managed to capture three photographs of the object before it took off into the sky.

Manuel Sanchez says he was with his co-workers when they spotted the object, a silver disk, in front of the backdrop of nearby storm clouds. He took his phone out to make a video of the sighting, but realized too late that his camera was set to only take stills; he managed to capture three quick shots of the disk, but was unable to change the camera to video mode before the object took off.

He estimates that the disk was between 10 and 15 meters (32.8 and 49.2) in diameter and perhaps only a kilometer (0.62 miles) away. He also said in an RDTV interview that he had a second encounter that evening when he spotted an odd light hovering over his house; this time he made sure his camera was in video mode; this can be seen in the RDTV interview.

Skeptics were quick to point out that the object in the daylight photographs resembles a commonly-available refrigerator magnet, with YouTuber LedrackVFX demonstrating how the images can be reproduced. However, the magnet in question is an elongated oval in shape, while Manuel Sanchez describes the object he saw as being disk-shaped.

Despite the relative ease of the reproducibility of the photographs it’s important to remember that simply because an image can be faked doesn’t mean that it actually was faked.

Subscribers, to watch the subscriber version of the video, first log in then click on Dreamland Subscriber-Only Video Podcast link.
2022-09-23
Previous Out There Post: Strange Object Flies Across S. Carolina Town
Next Out There Post: A New UFO Photo from NASA’s Curiosity Rover on Mars