A New UFO Photo from NASA’s Curiosity Rover on Mars 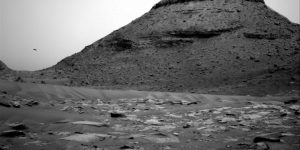 Aside from NASA’s solar-powered Ingenuity aircraft, should there be anything flying around the skies of Mars? One of the navigation cameras on board the Mars Curiosity Rover has photographed what appears to be an airborne object streaking past the rover.

Taken by Curiosity’s Right Navigation Camera on Sol 3613 (October 5, 2022 for us Earth-lubbers) in the Red Planet’s Gale Crater, the unidentified object, at least as it appears in the image, has an elongated, possibly oval shape, and is tilted slightly to the left. The anomaly appears to be blurred on one end, suggesting that it may be a smaller object traveling to the left of the frame and leaving a gaseous trail of some sort.

The object had apparently moved on by the time a second image was taken twelve seconds later.

The object is unlikely to be a large dust grain or a pebble kicked up by winds blowing across the Martian surface; although the typical wind speed on Mars is on par with those we experience here on Earth, the pressure of Mars’ atmosphere at the surface is less than one percent (0.6%) than what is found at sea level on Earth, meaning that for it to be driving anything larger than the fine dust particles that constitute Mars’ infamous dust storms, such a wind would need to be moving at hurricane-level speeds.

So what is this unidentified object that appears to be, well, flying? It’s possible that Curiosity happened to have captured a meteor as it streaked overhead, although there is still room for interpretation that allows the object to be an unidentified artificial craft, or possibly even the Martian equivalent of an insect.