We All Might Be Ancient Martians that Survived a Megatsunami 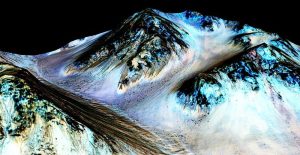 There is the possibility that life on Earth may not have originated here, but rather travelled to our planet on meteorites after first coming into being on the surface of Mars, according to a new study of Martian meteorites that suggests that the now-arid surface of the Red Planet was once covered in an ancient ocean that may have been more than a half-mile deep—an ocean that may have suffered a massive tsunami nearly three football fields high.

These two findings were discovered in two separate studies: the first one, conducted by researchers with the University of Copenhagen, found that ice-filled asteroids that bombarded Mars early in its history would have delivered a plethora of elements that would be necessary for the development of life, including amino acids that form the basis of the proteins used by biological processes, along with enough water to form oceans that were at least 300 meters (330 yards)—and possibly up to a kilometer (3/5ths of a mile)—deep.

On top of that, all of this material would have arrived on the Martian surface within 100 million years of the planet’s formation, meaning that if life arose there it might very well have done so well in advance of the emergence of life on Earth. If this is the case, that opens the possibility that Martian rocks, blasted into space by one of the powerful meteor impacts that struck the planet’s surface (more on that in a minute), might have carried primitive lifeforms to Earth, kick-starting the biosphere that we are a part of today.

This discovery was made by studying rocks that did indeed make just such a journey from Mars, having been ejected into space by a major impact shortly after the planet’s formation. The estimate of how much water may have been present on Mars at the time was determined by measuring the variability of chromium isotopes present in the ancient Martian crust, represented in the chemical makeup of the recovered meteorites.

The combination of fathoms-deep ancient Martian oceans and frequent meteor bombardment of the early Solar System’s planets also inevitably generated another phenomenon: megatsunamis. Researchers with the Planetary Science Institute in Arizona discovered the remnants of a 3.4 billion-year-old impact crater on-par with the one formed by the Chicxulub impact that sealed the fate of Earth’s dinosaurs 65 million years ago.

Called Pohl, this 110-kilometer (68.35-mile)-wide crater is situated in the basin of a long-since dried ancient ocean that has evidence of soil deposited there by a catastrophic tsunami. The asteroid that would have formed Pohl is estimated to have been somewhere between three and nine kilometers (1.9 and 5.6 miles) across, depending on how fast and what angle to the ground the giant rock was travelling when it hit. The researchers estimate that the impact generated a 250-meter (273-yard)-high megatsunami that swept as far as 1,500 kilometers (932 miles) across the Martian surface.

“When we think of a tsunami, we think of a wave, a wall of water approaching the shoreline and overrunning it. This would have been very different,” explains study lead Alexis Rodriguez. “You would have seen this massive wall of turbulent, reddish water, with some of it flying upwards and falling back into the wave along with rocks and soil.” In the lower Martian gravity, the constituents of the quarter-kilometer-high wall of water, rock and soil would have fallen nearly three times slower than if the same event were to have occurred on Earth.

The seismic wave generated by the impact would also have thrown rocks and soil high into the air as it rapidly emanated from the impact site, creating what would, along with the giant tsunami, have been a deadly environment. “Very terrifying, definitely nothing to surf on,” remarked Rodriguez.