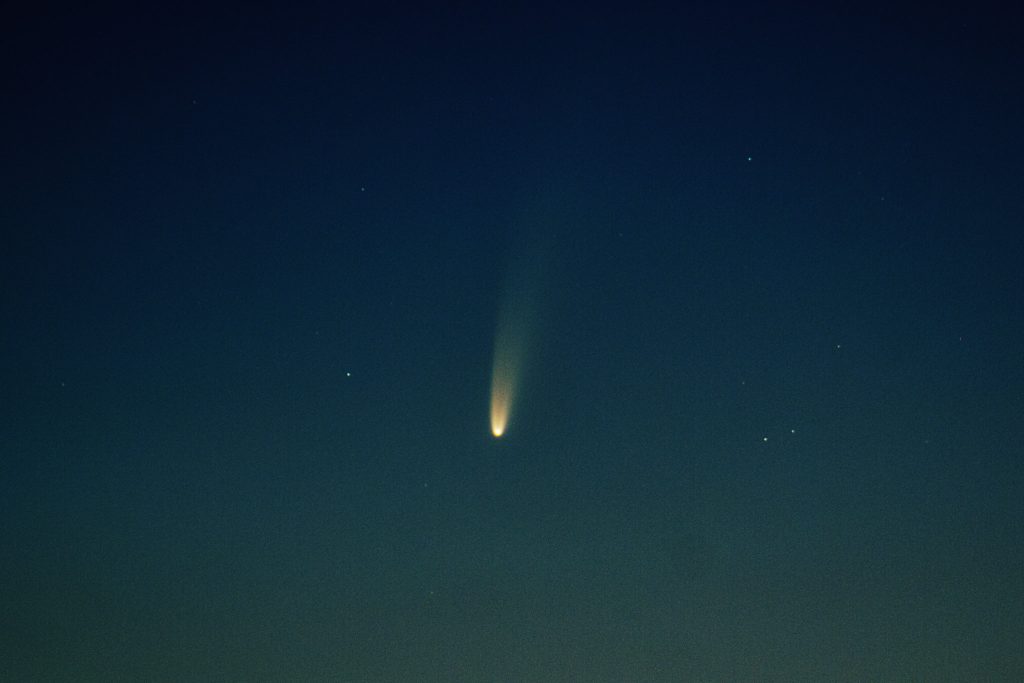 Comets ATLAS and SWAN might have turned out to be duds for sky watchers, but a new celestial spectacle, Comet F3 NEOWISE, is already exceeding the expectations set by its two predecessors.

Already-visible to the naked eye, Comet F3 NEOWISE (or C/2020 F3 (NEOWISE)) was discovered on March 27 by (and named after) NASA’s Near Earth Objects Wide-field Infrared Survey Explorer. It reached its closest point to the Sun on July 3, and although it has reached an apparent magnitude of +1 in brightness—slightly dimmer than the average brightness of Mars—it is somewhat obscured by the early morning twilight sky, due to the comet’s closeness to the Sun. For those looking to catch an early glimpse of the comet, it rises at about 3:30 a.m., and can be spotted in the direction of the constellation Auriga.

But by July 12 F3 NEOWISE is expected to appear in the sky shortly after sunset, in the direction of the Big Dipper. This comet is a retrograde object, meaning it orbits the Sun in the opposite direction from the majority of the Solar System’s other bodies, so it will climb in the evening sky as time progresses; by July 20 it should appear at about 20 degrees above the western horizon at around 10:00 p.m., when viewing conditions should be darker.

With a little luck, F3 NEOWISE’s brightness will hold long enough for sky watchers to get a good look at the comet, now sporting two tails, one made of dust particles, and the other a stream of gas being blown away from the dusty iceball. Its near-parabolic orbit will eventually take it back into the far reaches of the Solar System, and isn’t expected to return to our neck of the woods for another 6,800 years.